Germany, Day 6: I Can See For Miles and Miles

Today was our first full day in Heidelberg.  We had planned to go to Stuttgart to visit the Mercedes Benz Museum, but we all woke up late, I had a, uh, headache, and Pa wasn’t previously as excited to go as he was before, so we made the decision to stick around Heidelberg instead.  Heidelberg is mostly famous for its partly ruined castle, Schloss Heidelberg, which is perched on the side of the high hills that surround the city, and is accessible by way of one of Pa’s favourite contraptions, the funicular.  We had a lazy breakfast in the hotel restaurant and ambled over to the funicular, conveniently located next to the square over from our hotel. 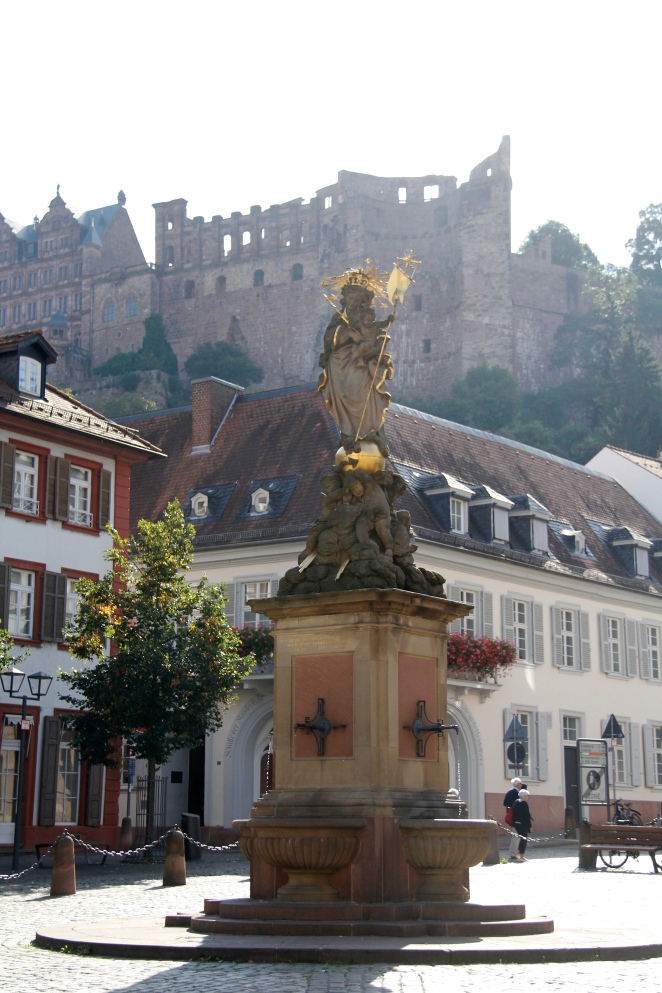 There are actually two funiculars on the hill – a newer modern one that takes you from the bottom to the castle and halfway up the mount, and then a creaky wooden 125 year old one that takes you to the top.  We decided we wanted to see the castle first, so we exited the funicular and headed down the marked path, past a couple of small shops and cafes to the partly ruined castle.

The castle is cool and different – its a mishmash of different styles as it was chronically being hit by lightning and parts of it got damaged.  Construction started in the Renaissance and eventually stopped, leaving half of it ruins and the other parts in differing states of crumble.  The castle overlooks the city and on a clear day (like the first part of today), you can see all the way to Mannheim. 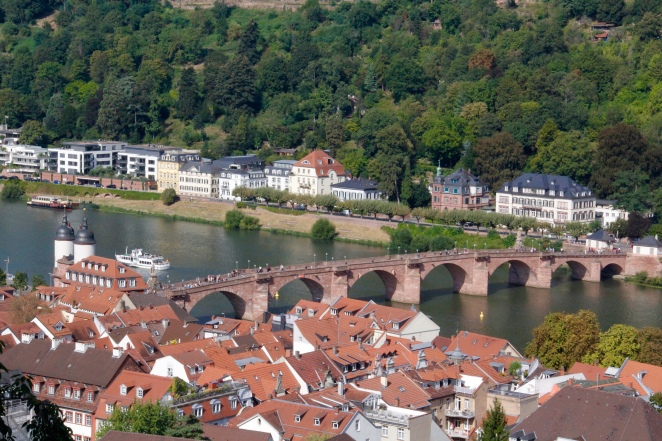 The castle is enormous.  We spent the better part of the morning and afternoon wandering around the grounds, with a brief stop in the castle cafe to have our standard beer/pretzel/apple strudel. 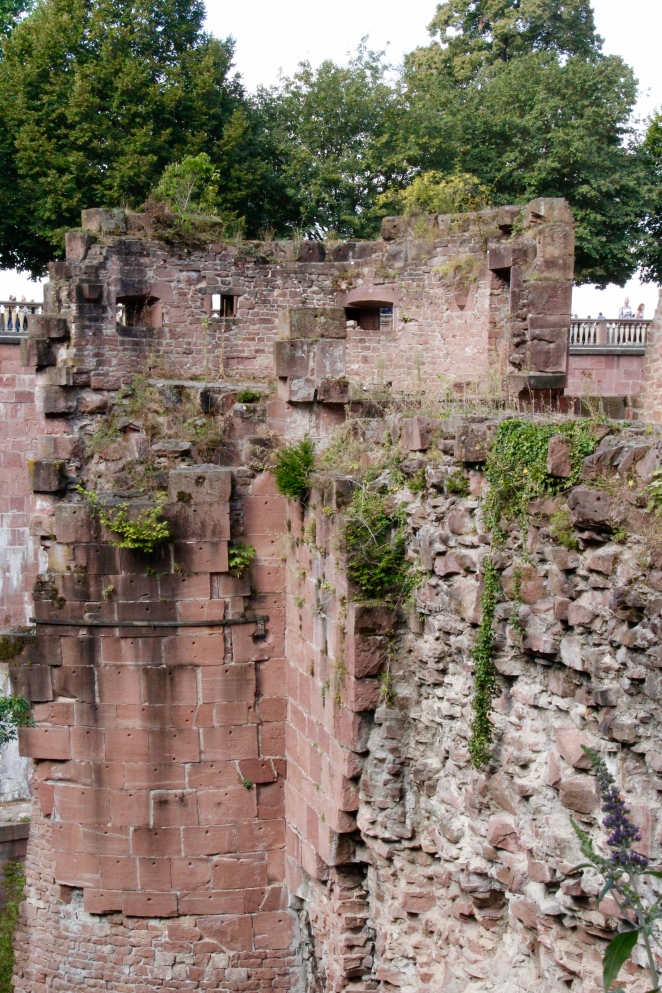 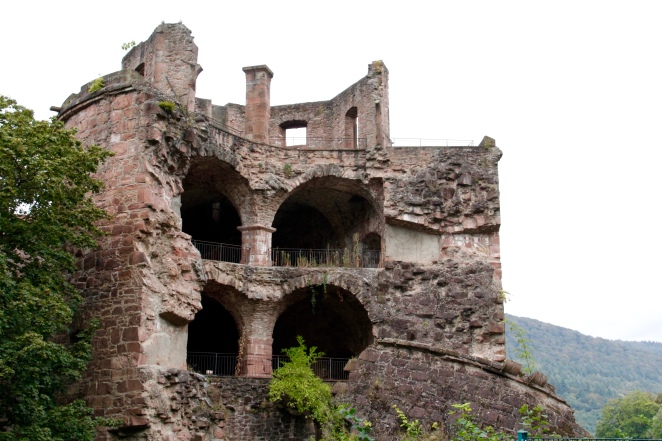 A relatively recent feature of the castle is you can get married in a sacred or civil ceremony there, so we got to see a few different bridal parties of varying fanciness.  I am a creeper at heart, so I had to get a couple of snaps in. 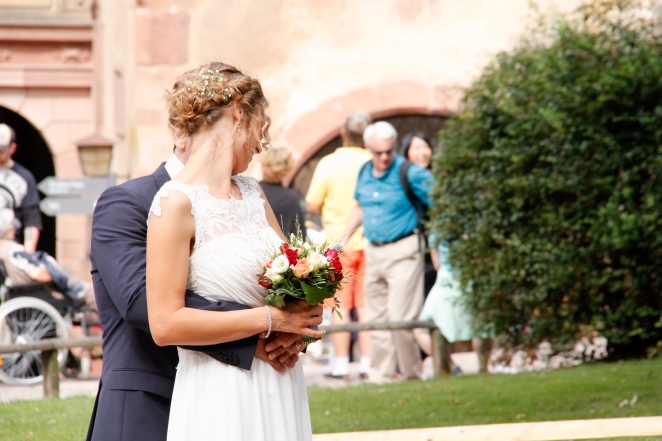 We had had our fill of castle so we headed back to the funicular station and got on board ye olde funicular.  The funicular cars are adorable and shake and sigh through the 10 minute ride to the top of the hill.  The top of the mount didn’t have much to offer – a closed falconry, a derelict boarded up restaurant and more spectacular views. 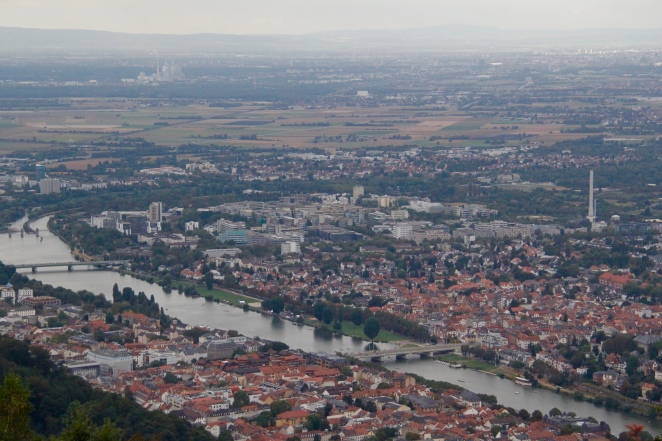 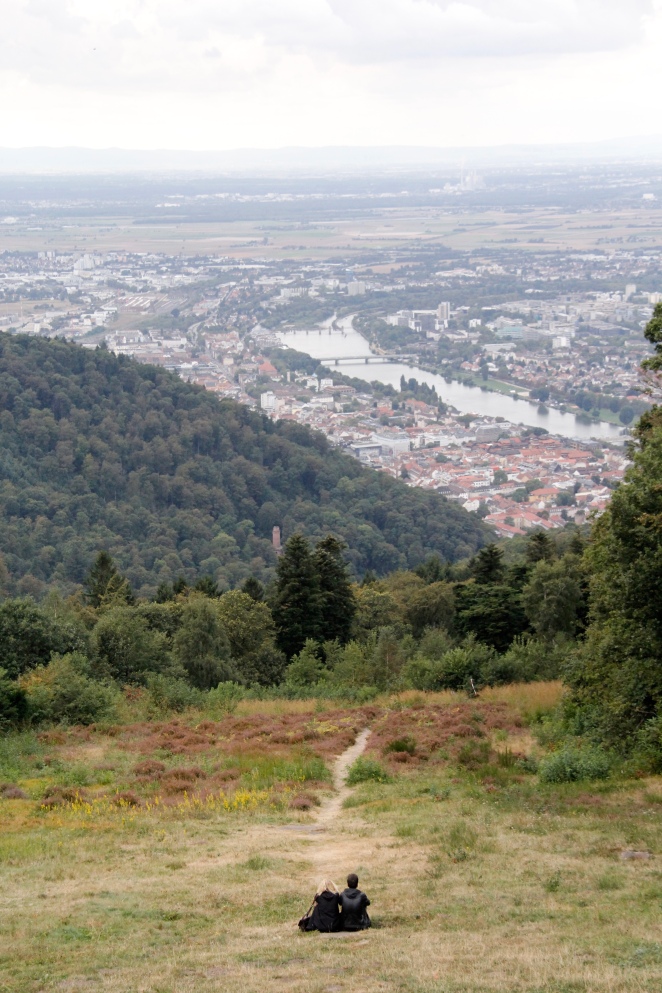 We decided that it was time to head back and got on our little shaky funicular, then the smooth modern funicular and headed to the hotel restaurant patio for beers and so that I could write out some postcards.  The next few hours were filled by dinner, ice cream, and a frantic shop at the Lindt chocolate shop and as the rain started, we headed in for the night.