Germany, Day 13/14: Taking Care of Business/You Are So Beautiful

Day 13 was more of administrative day.  We left Augsburg for our next home base in Nuremberg and had a huge bundle of laundry to be done and also needed a break from sightseeing.

This morning we filled up on delicious hotel breakfast and hit the train station for a day trip to the beer capital and UNESCO World Heritage Site of Bamberg.  Bamberg isn’t a super well known city and we decided we wanted to go because it looked cute and Pa and I were interested in trying some of their 9 breweries.  They are also home to ‘Rauchbier’, which is a smoked beer.  We grabbed a cab and got dropped off in the middle of the old town. 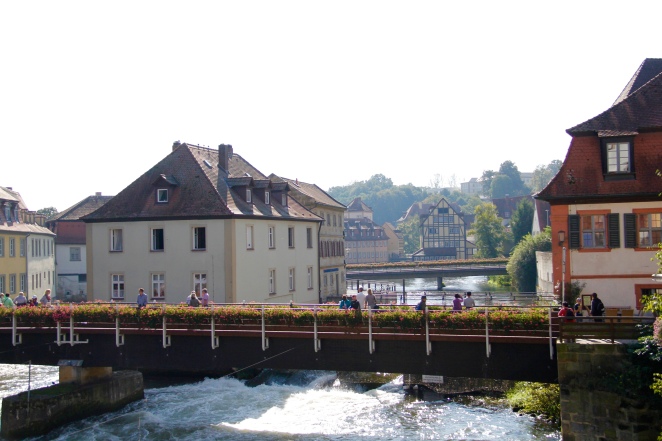 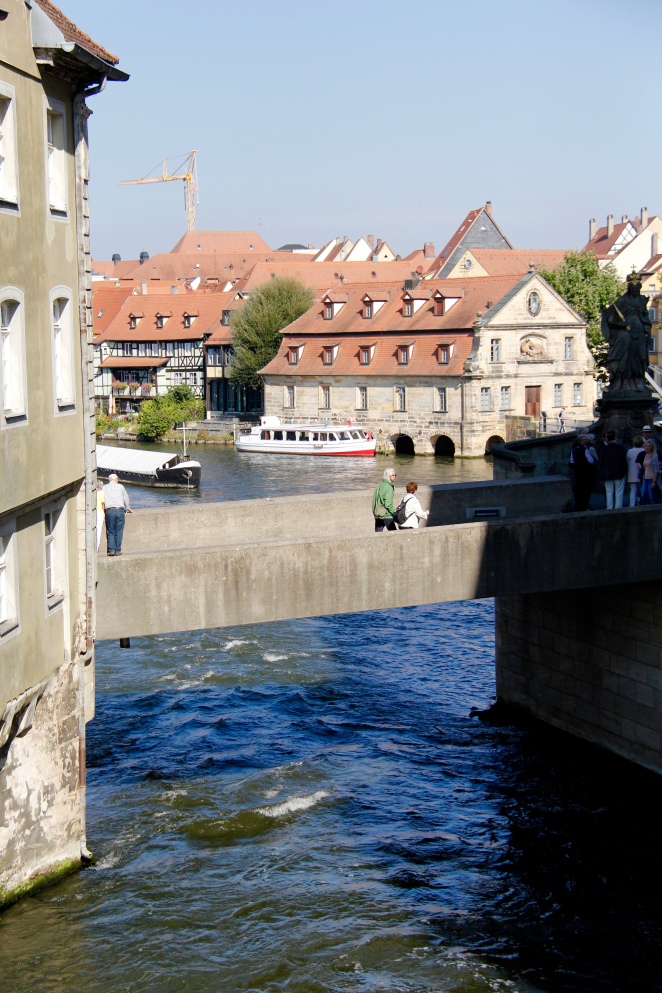 It happens every now and again that I visit a new place and get a good feeling about it.  A really good feeling.  A ‘I could probably just sit in this spot for the rest of my life’ kind of feeling.  I felt that way at the Marine Organ in Zadar and at Big Beach in Ucluelet.  I felt this way about Bamberg.  Bamberg is charming but not just in a ‘this place is so cute!’ kind of way.  It had a movement to it with the river flowing through the centre and the medieval breweries dotting the cityscape. 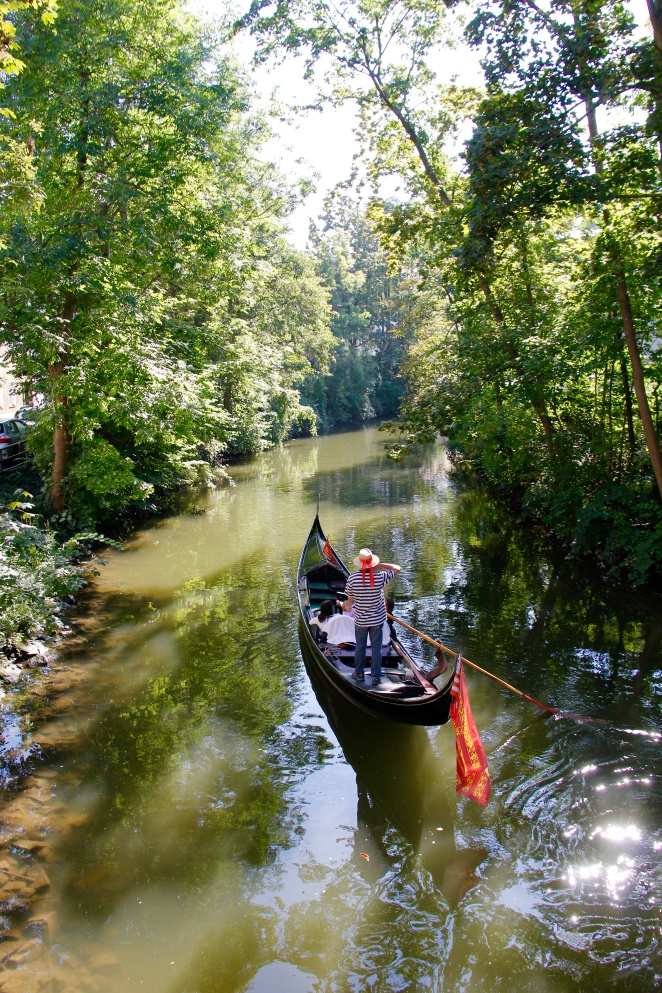 We ambled around and gawked at all the beauty and character, significant lack of tour groups and half timbered buildings seemingly floating on the river. 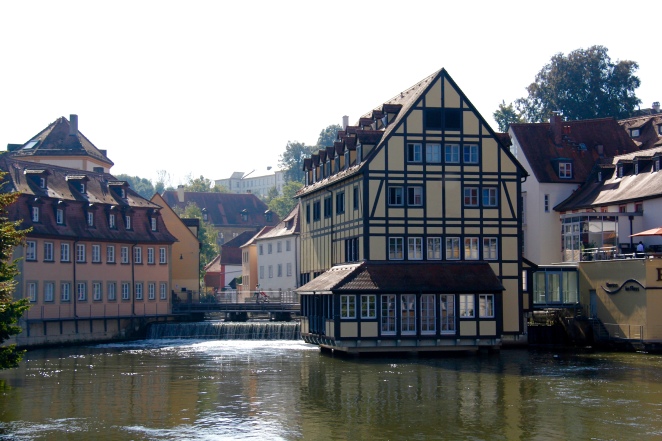 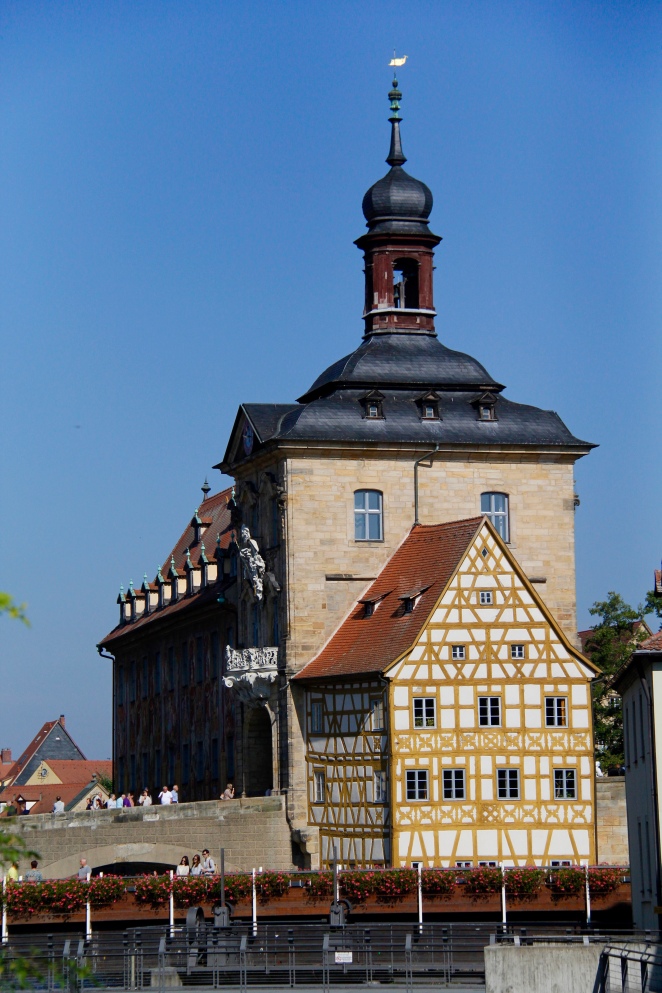 We decided that we wanted to get some beer in our bellies before we tackled some of the interesting churches in the city, so we grabbed a riverside table at the Klosterbrauerei and slowly sipped from the ceramic mugs.

After settling the bill we hiked up to the Church of Our Lady, a gothic structure with an incredible organ.  I always hope that when I’m visiting old churches and cathedrals the local organist will bust out some Bach fugues while I’m there, but so far no luck. 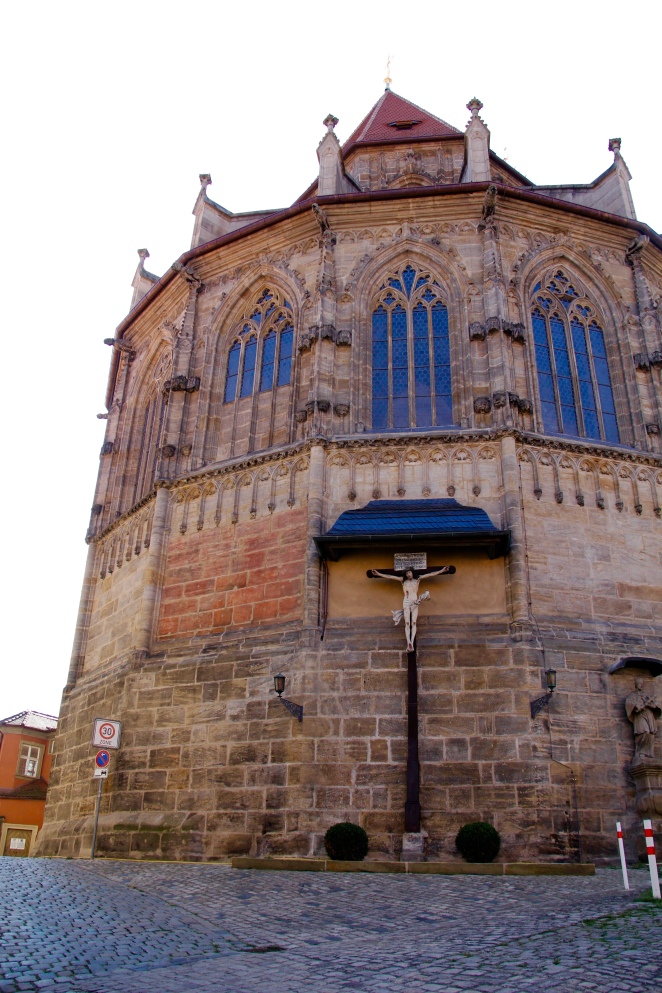 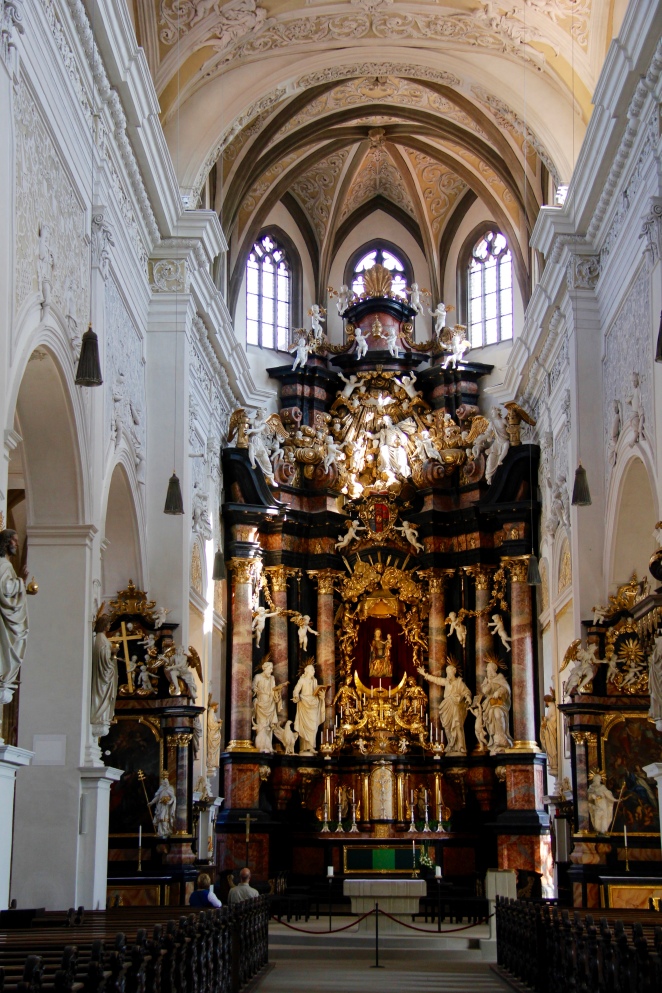 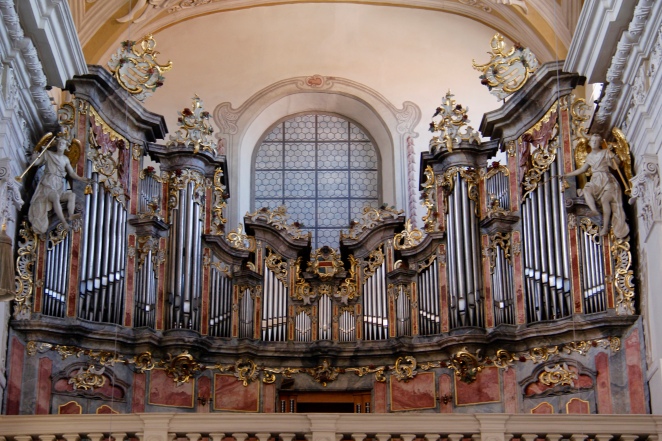 We then moved to the adjacent Dom, another gothic behemoth but we found it significantly underwhelming compared to the previous Frauenkirche. 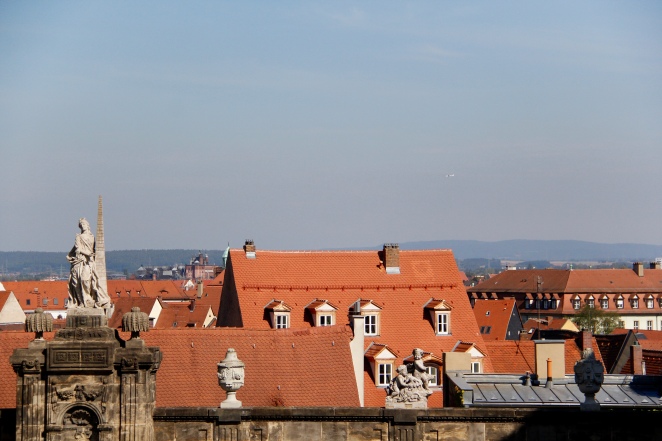 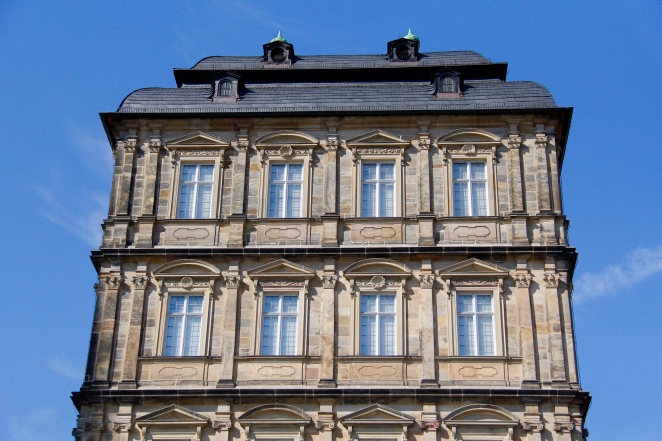 After our fill of Catholicism, we felt it was time for lunch and time for smoked beer.  We hit up the Schlenkerla brewery as they still use their original oak casks to smoke their beer.  We shared a long table with a quiet Japanese twosome and ordered our meals and drinks.  The Rauchbier was interesting – not smokey like a peaty scotch, but like bacon.  It was like drinking liquid bacon.  Sadly, our meals were not up to par and came with pickled everything, not mentioned on the menu.  We decided that in order to get the taste of pickled things out of our mouth, we would need dessert and more beer. 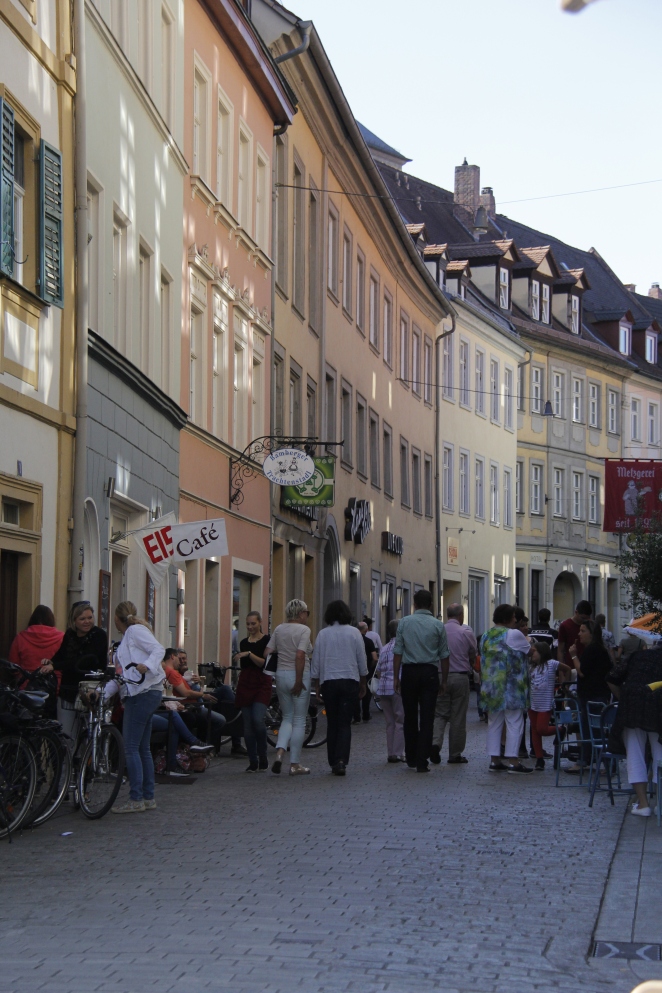 The town started to get busier and busier and hotter and hotter, so we found a sunny square with a pretty patio.  Pa and I ordered a flight of beer each as well as a dish of vanilla ice cream and Ma had to test the town’s apple strudel offering – all was delicious and a welcome palette cleanser from lunch. 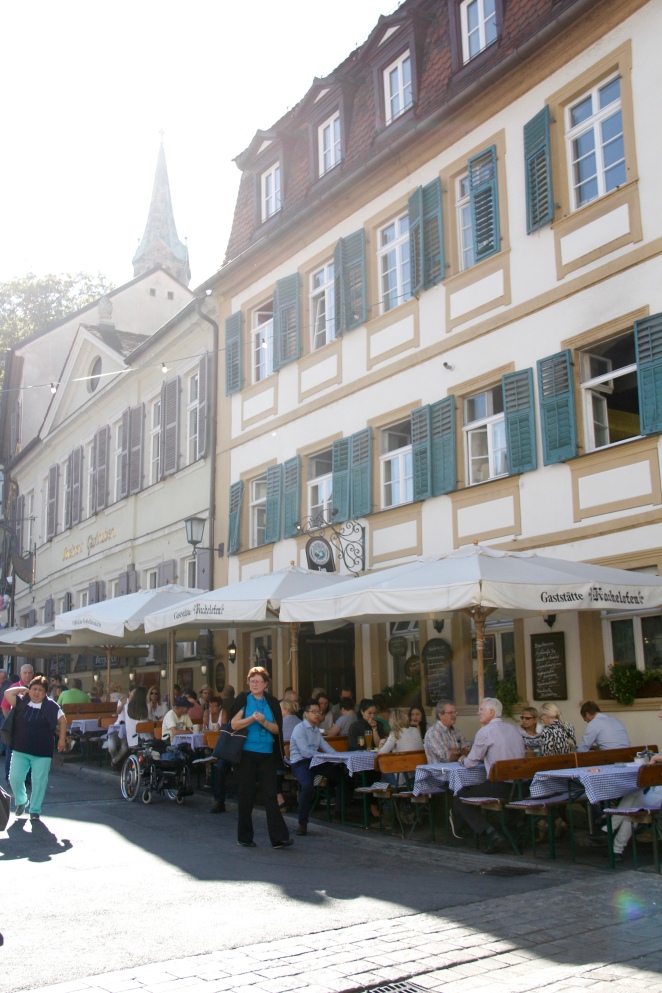 As our energy started to wane, we headed back over one of the many bridges, drank in the beautiful scenery and landscape and got back to the train station, again cursing the fact we didn’t spend a few days there.  Anyone thinking about going to Germany, I highly recommend Bamberg.  It shall hold a special place in my heart. 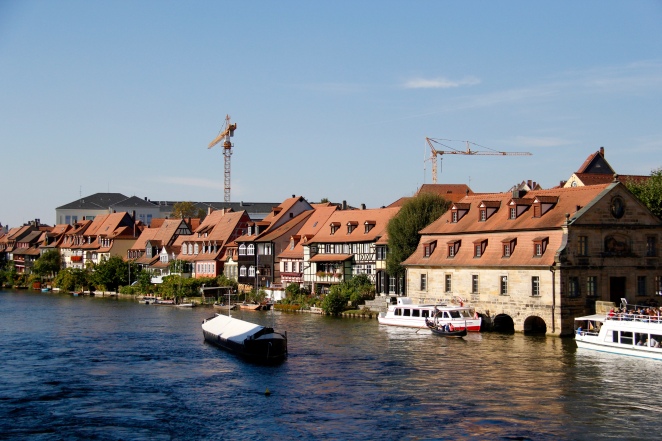 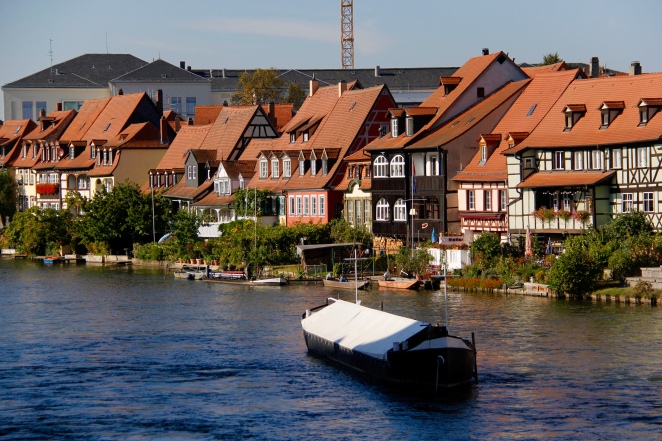