This morning we got up, packed our bags for the penultimate time, ate some breakfast and said goodbye to Dresden, hopping on a train making its way from Prague to Berlin.  The train ride was a little different from our previous ones on the trip – because it was an EC (Euro-City) train, we got our own compartment, which I find to be one of the most romantic things in travel.

After 2 uneventful hours on our blue train we rolled into the enormous Berlin Hauptbahnhof at around 1330hrs.  We hired our cab and thankfully no one was killed on our 20 minute drive to the Charlottenburg area of Berlin.  We decided to go boutique for our last hotel on the trip and chose Homage a Magritte, a family run walk-up themed in the paintings and art of Belgian surrealist Rene Magritte.  The owner’s daughter Sofia greeted us and led us to our room.  The hallway walls are adorned with different paintings and themes of Magritte’s, and our room featuring Le Blanc Seing.  We then grabbed our necessities and hit the town.

The area of Charlottenburg is beautiful – long streets and laneways lined with cafes, boutiques, coffee shops, restaurants, book shops (one coffee/stationery combination shop!) and all very nearby to the s-bahn (like German skytrain) station of Savigny.  We had some soup and sandwiches at a nearby cafe and then headed for Unter Den Linden.

I have been so excited to see the Brandenburg Gate for a while now – I just think it’s the most powerful and poetic landmarks, the four horses, chariot and Lady of Peace bursting off the top.  I was ecstatic to finally see it, be near it, take photos of it.  I was, however, a little disappointed that a giant protest was happening almost right in front of it, and that you weren’t allowed to walk through.  It turns out, Berlin is also hosting German Reunification festivities and have roped off that part. 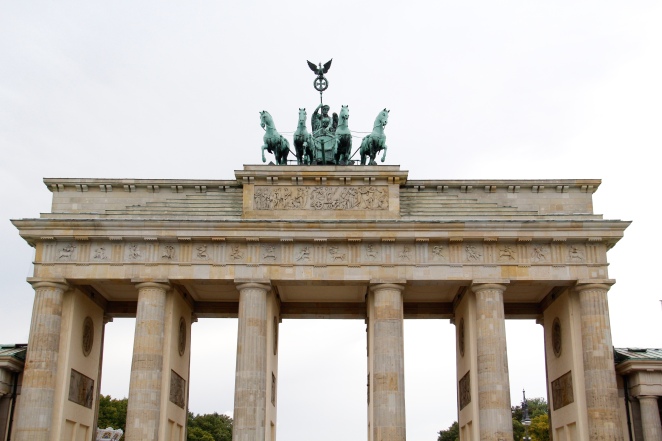 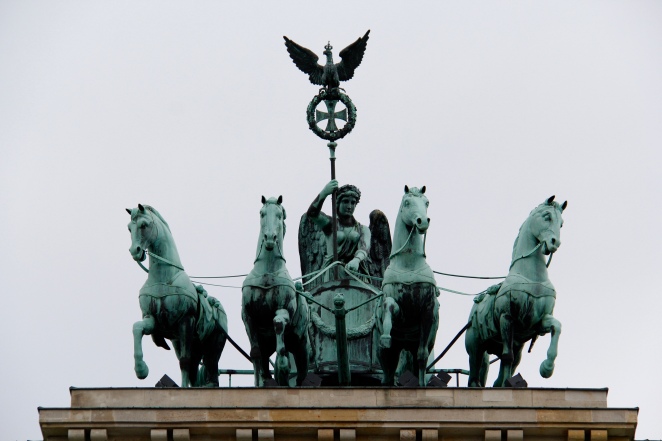 The moved on and decided to peak at the Reichstag, Germany’s parliament.  Beside the building, was this touching monument, a memorial to the politicians murdered by Hitler.  Each of the 96 stones lists the memorialized’s name, dates, which party they were with and where they died.

We then had a sit on the broad lawn in front of the Reichstag, dodging photo takers and other protesters while finding a good spot. 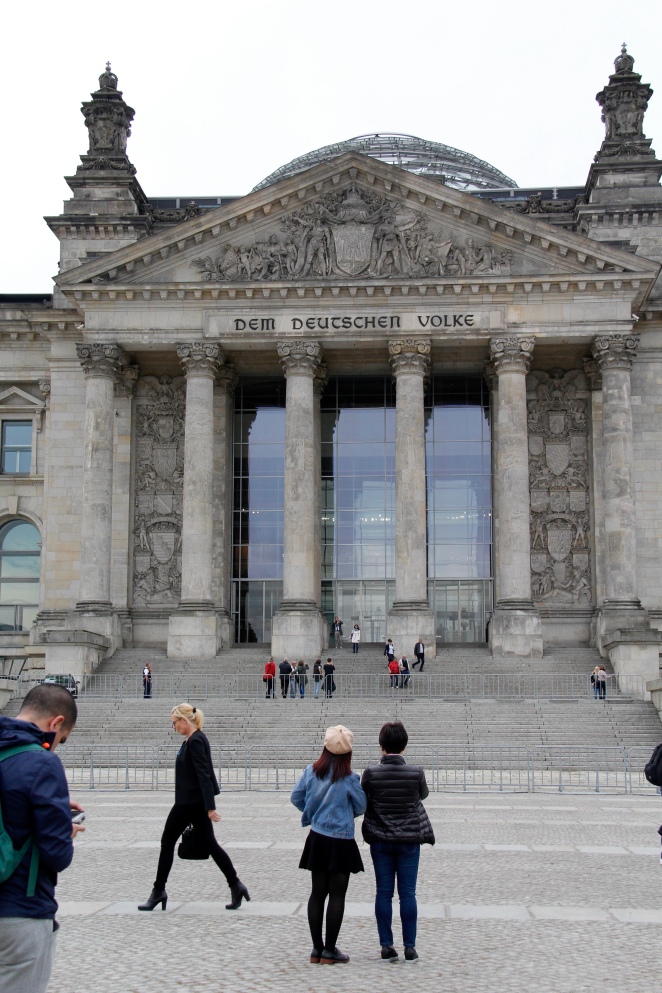 Pa and I decided it was probably getting close to beer time so we walked back to the bahnhof, not before looking at the memorial to those who tried to cross over the Berlin Wall.  We also got to witness some sort of drunken Russian homeless screaming match, but no one seemed perturbed so we moved on.

Outside of our train station we found a cute looking pub with a beautiful leafy beer garden and tucked in – delicious Italian food, sublime desserts and cold beer were the name of the game and we indulged before taking the stroll back to our hotel.