Day 12: You Say Goodbye, and I Say Hello

Today is my birthday!  This morning we were up early and ready to go to meet our driver Viktor, who was to drive us from Bucharest to Veliko Tarnovo in Bulgaria.  We met Viktor and his grey Passat wagon, and off we went, leaving Bucharest and Romania behind, heading for the third and final country on our trip, Bulgaria.  To say that Viktor is an aggressive driver is an understatement.  Not only was he fast, but he had a full sized iPad attached to his dashboard where he would respond to text messages and look at photos of his kids.  After 2 hours and falling into some sort of stress sleep, I woke up to us pulling into the hillside Bulgarian town of Veliko Tarnovo.  We thanked Viktor for the ride and not killing us, checked into our hotel, and went for birthday lunch, where we had beer, pita and kebab. 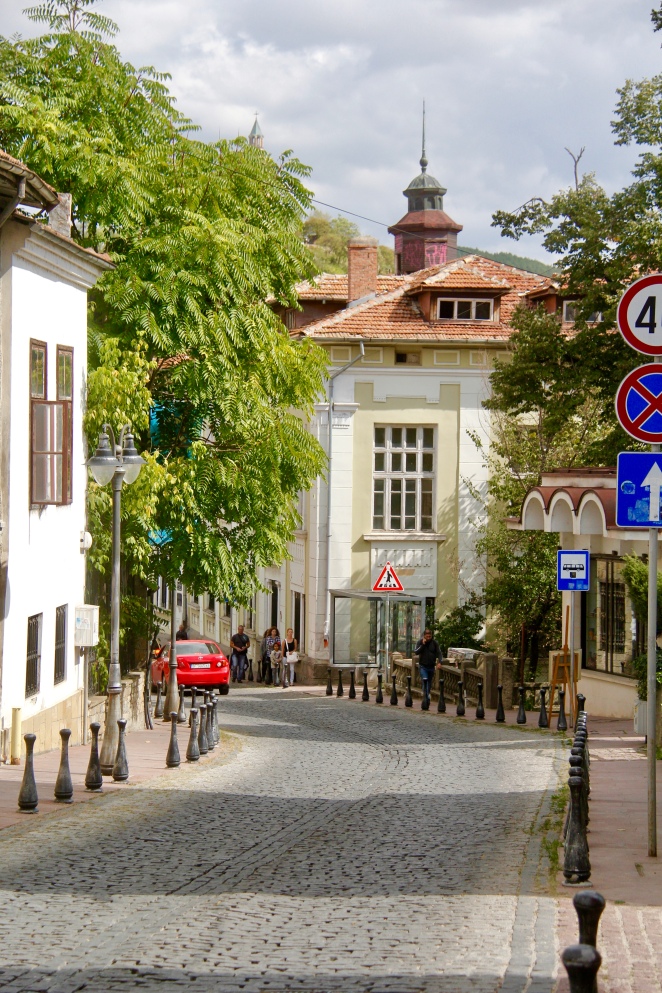 Veliko Tarnovo is a pretty town, architecturally very different from anything we’d seen so far on this trip.  The town is prized as it is an example of Bulgarian Revival architecture.  The town is built on the side of a hill, with Tsaravets Fortress on one end. 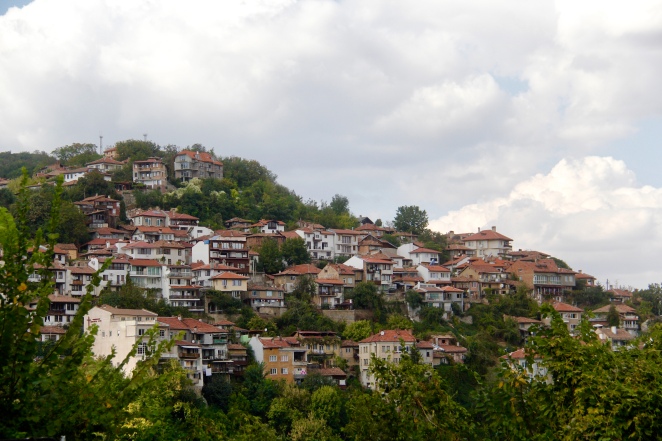 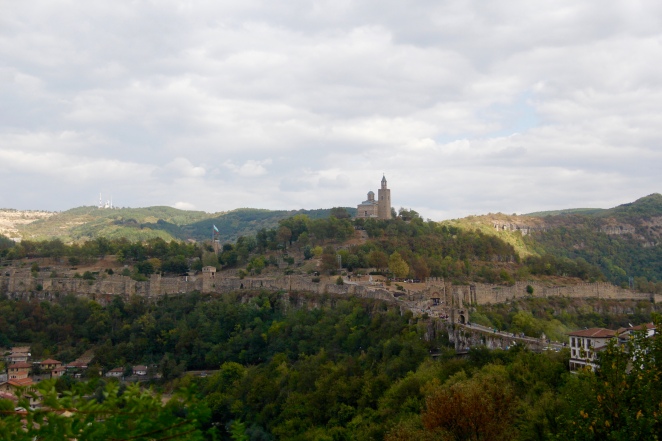 We decided that that afternoon we wanted to check out a street called Samovodska Charshia.  It’s an old time-y street filled with shops and craftsmen hawking their wares, as well as a few cafes.  Unbeknownst to us, this weekend is a Bulgarian national holiday (their Independence Day), so there were celebrations at every turn. 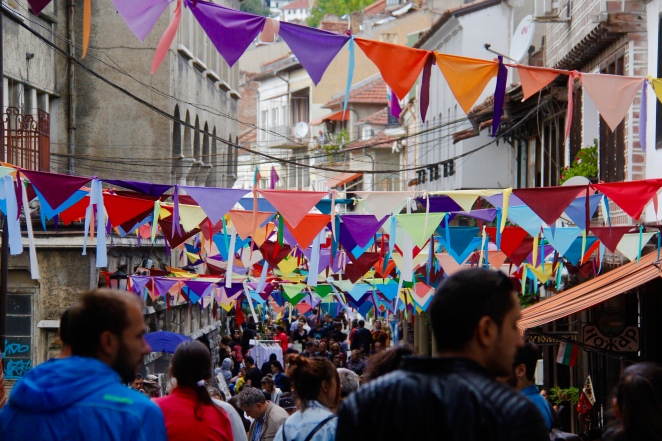 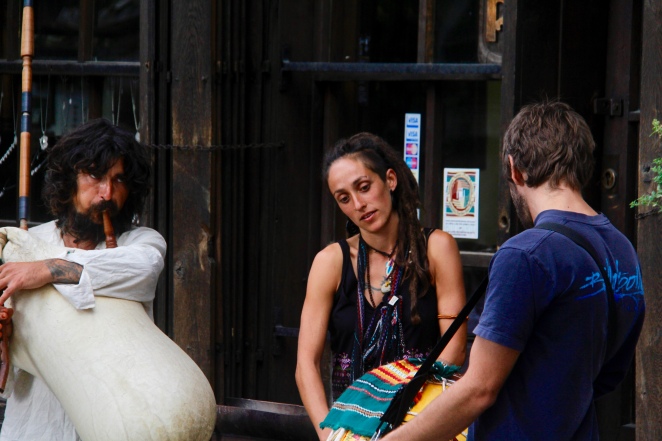 As soon as we started researching where to go in Bulgaria and found Veliko Tarnovo, Ma wanted to pick up some handmade dishes.  There were so many to choose from, but she settled on some, and for myself I picked up a handmade steel pocket knife (I have a thing for knives) and a pair of hand stitched leather and sheepskin slippers (when I picked them up, the grim artisan looked at me and said ‘I made this’). 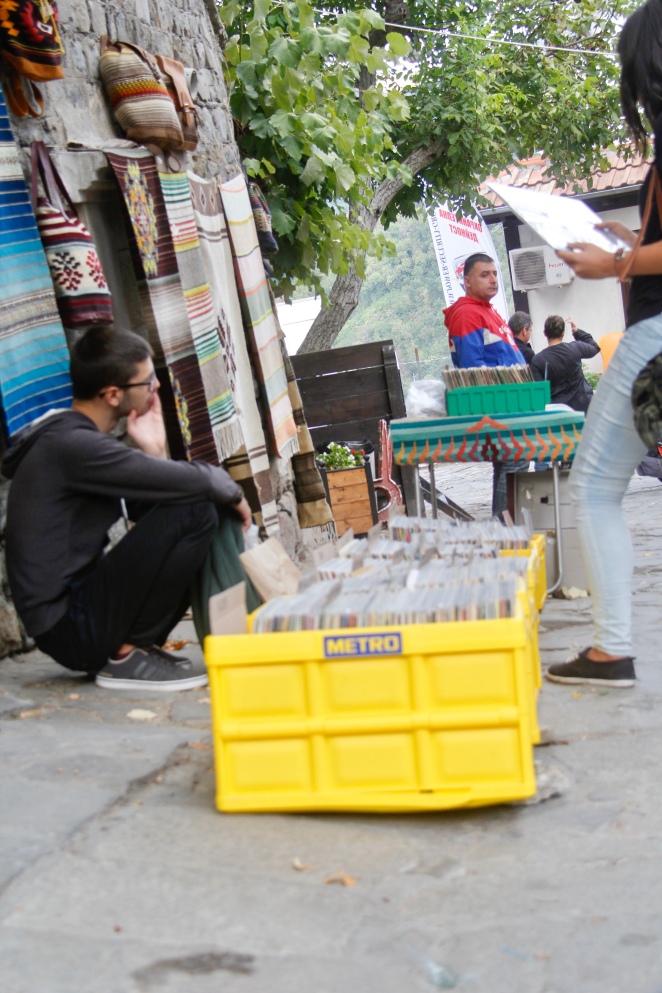 There was music, food and revelry on every corner.  Everyone seemed pretty excited about the 3D laser show that would be projected at 2000hrs (I’m assuming a laser-Floyd type of production, showing the fight for Bulgarian independence).

For birthday dinner I wanted to try a restaurant called Shtastliveca as it purportedly has delicious food and a beautiful leafy patio, and sure enough it did – I had pizza margherita and a beer, Pa had pasta bolognese and Ma had chicken and baked potato.  For dessert Ma and I had the restaurant’s signature Biscuit Cake – a decadent concoction of marscapone and chocolate.  By the time we left, revellers were crowding the balconies overlooking the canyon, eagerly awaiting the 3D laser show.  We got back to our hotel in time to stand on the balcony and watch the fireworks (and I pretended they were for me).

One thought on “Day 12: You Say Goodbye, and I Say Hello”