Today was a special day for me so forgive me while I self-indulge.

A few years ago Pa was contacted on Facebook by a man from Belgium named Dominique who had the same last name as us. He asked if we were possibly related, so Pa responded with the ancestry that we were aware of, and discovered that Pa’s great-grandfather Ivo was brothers with Dominique’s great grandfather (making Pa and Dominique second cousins). Dominique was working on the family history and trying to trace not only the DeCaigny diaspora, but the DeCaigny ancestry as far back as he could. We kept in touch with Dominique on Facebook and Instagram and this year when we decided to visit Belgium, we were excited that we could meet him in person. And that was today.

We met Dominique hiding from the rain under the Belfry of the tiny West Flanders town of Tielt. We hugged and started chatting right away. Dominique had made some pretty special plans for the day, but we wanted to start by getting better acquainted, so we headed towards a coffee shop that was sadly closed, but it was the original house in Tielt that our ancestor Romain bought in the 1600s. Apparently Romain was quite adept at buying and flipping houses. He also built the top of the Belfry (UNESCO World Heritage Site).

We tucked into an open cafe, drank coffee, got to know each other and exchange gifts (Dominique made us beautiful books detailing the family history along with photos and documents).

Our next stop was the City Hall of Tielt, where our last name was immortalized in stained glass. There was also a painting of an ancestor who had fought in a few wars and lost his left hand (visible in the painting). 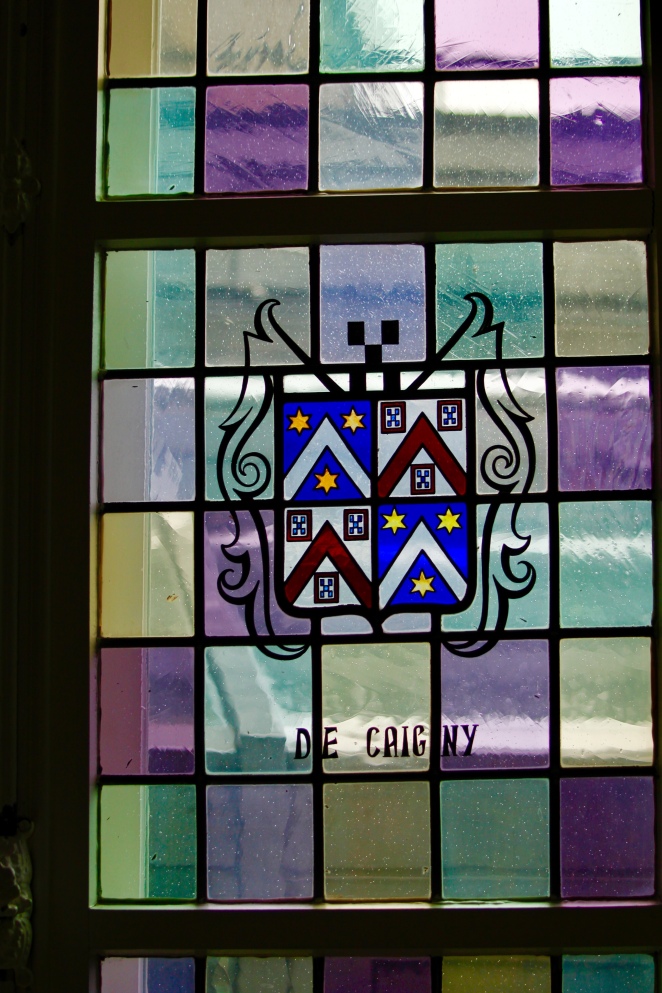 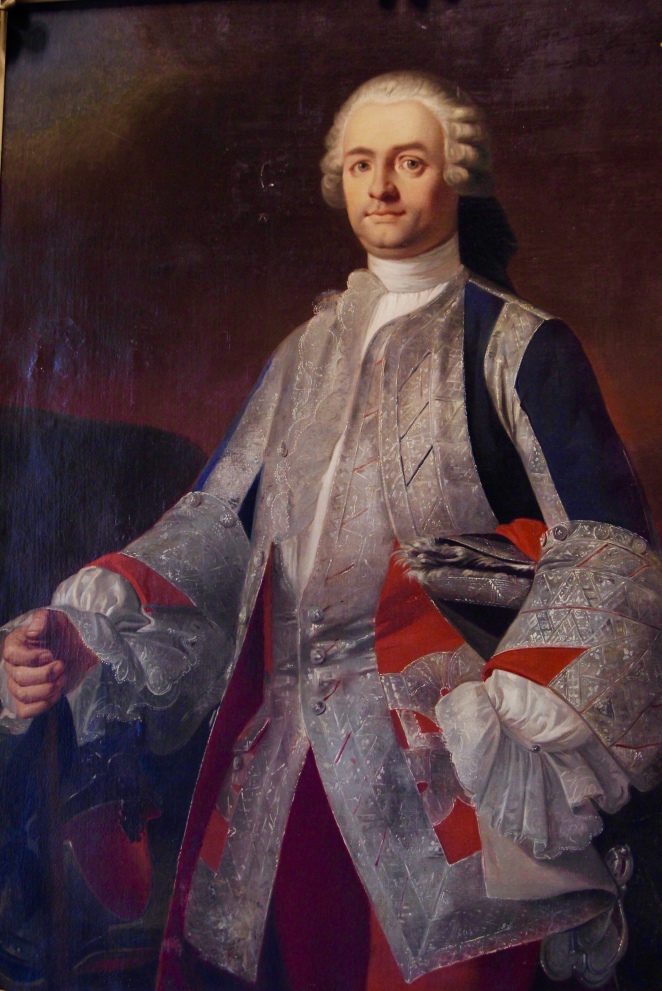 Next, Dominique managed to secure viewing some documents with the city archivist Hannes. Hannes has pulled a few books and papers to show us and also had encyclopedic knowledge of the entire history of the town. Hannes showed us a land book from the 1600s written by an ancestor, Romain DeCaigny’s death announcement, and my great grandfather Jules’ birth registry (which also mentioned my great great grandfather Ivo). Jules moved to Canada with his wife Léontine in 1913 and settled in St. Boniface, Manitoba. 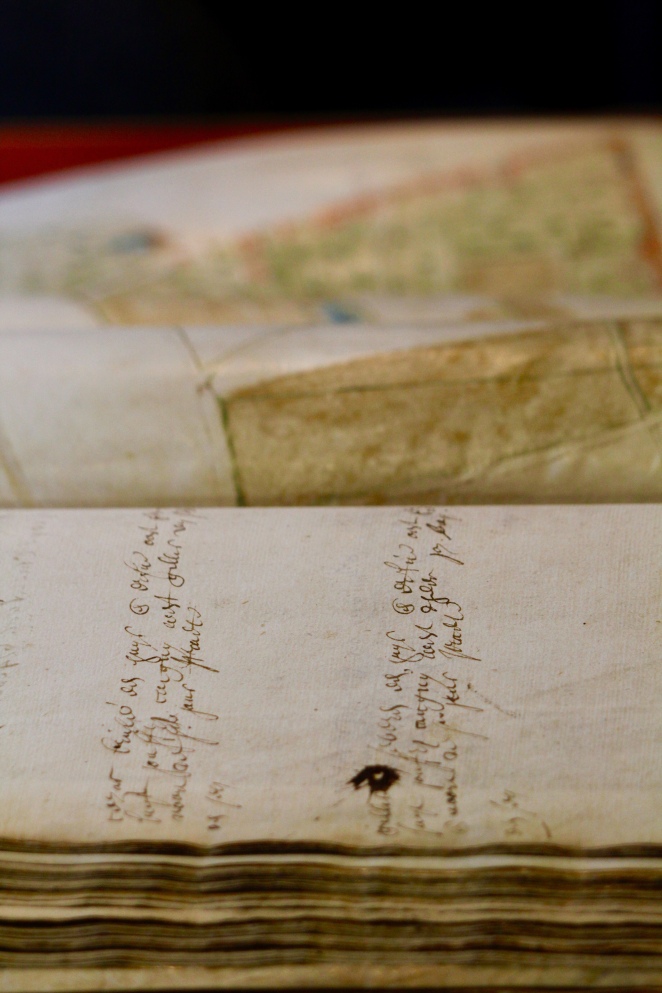 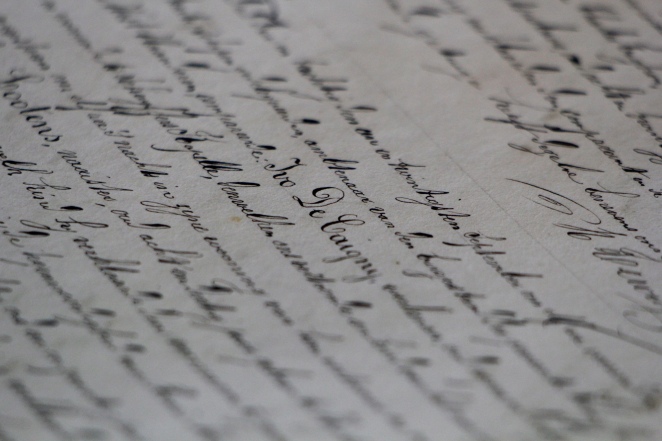 Hannes was clearly very passionate and loved his job as the archivist. For fun, he showed us one of the archives, then put on white gloves to show us the oldest document they have there, a testimony by an spinster, written on animal-skin parchment in the 1300s. The whole thing was like my very own episode of “Who Do You Think You Are?”.

We had a break for lunch where me, Pa and Dominique clinked beer glasses together for the first time. One of the many things that I learned from Dominique is that although the last name is French and probably came from France originally, the DeCaigny’s are Flemish (Dutch-speaking).

After lunch we hit the streets of Tielt, with Dominique giving us some WWI history in the city. During the War, Tielt was occupied by the Germans, who turned Tielt into their Flanders headquarters. Homeowners were kicked out to make way for soldiers and commanders, and it was in Tielt where the decision was made to use chlorine gas.

We then went to the local church, Saint Peter’s, where my great grandfather Jules married Léontine, and where many DeCaigny’s were baptized and/or buried.

The weather has cleared up and Dominique had one more surprise for us before we parted ways – he secured himself some of what was voted the best beer in the world 3 years in a row – Brouwerij De Sint-Sixtusabdij Van Westvleteren 12. We found a picnic table in a leafy park and sat down while Dominique poured the beer into the appropriate bar ware and told us the story of how you buy the notoriously difficult to acquire beer. 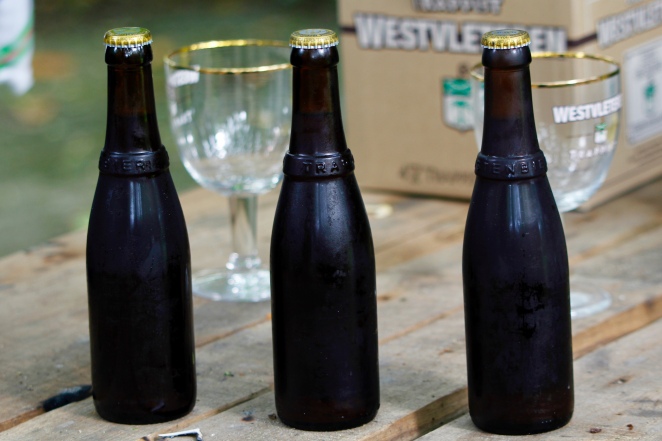 You can’t buy the beer just anywhere, you can only buy it from the brewery at the Monastery, and the monks only brew enough per month to support themselves and no more. If you’re interested in buying the beer, you go on the website, and they tell you what time you can call to order. They only have 1 phone line, so Dominique had 2 cell phones with him and would alternate calling over and over for an hour. When you get through you say how many cases you want and you give your license plate number and they tell you the time frame that you can come and pick it up. When you pick it up, they know your order from you license plate, you pay and load up your car.

I was a little concerned about drinking in the park, so this is how the conversation went with Dominique:

Me: are we allowed to drink in the park?

Me: won’t we get in trouble?

Dominique: in trouble from who?

Dominique: what would the police do?

Me: in Canada you can’t drink in public. You could get a ticket.

The beer was really delicious, smooth and rich, and definitely worth the kerfuffle that Dominique had to go through to get it. We finished our beers and made plans to see Dominique with the rest of his family on Friday in Antwerp, said our goodbyes, and headed back to Poelkapelle for one last sleep at the Farm.