This is one of the longer trips we’ve taken, and as such, we’re starting to get tired. Not just physically tired, but tired of seeing things and going places. This morning we were slow to get up and hemmed and hawed about our plans to go to Brussels for the day. We finally decided that we should go, as we did want to at least the Grand-Place.

We walked from our apartment to the Antwerpen-Centraal train station and noticed a lot of diversity on our walk – Muslim women in hijabs, Hasidic Jewish men in rekelech, hip young people and elegant older people.

When we reached the train station we grabbed some breakfast and admired the beautiful station. 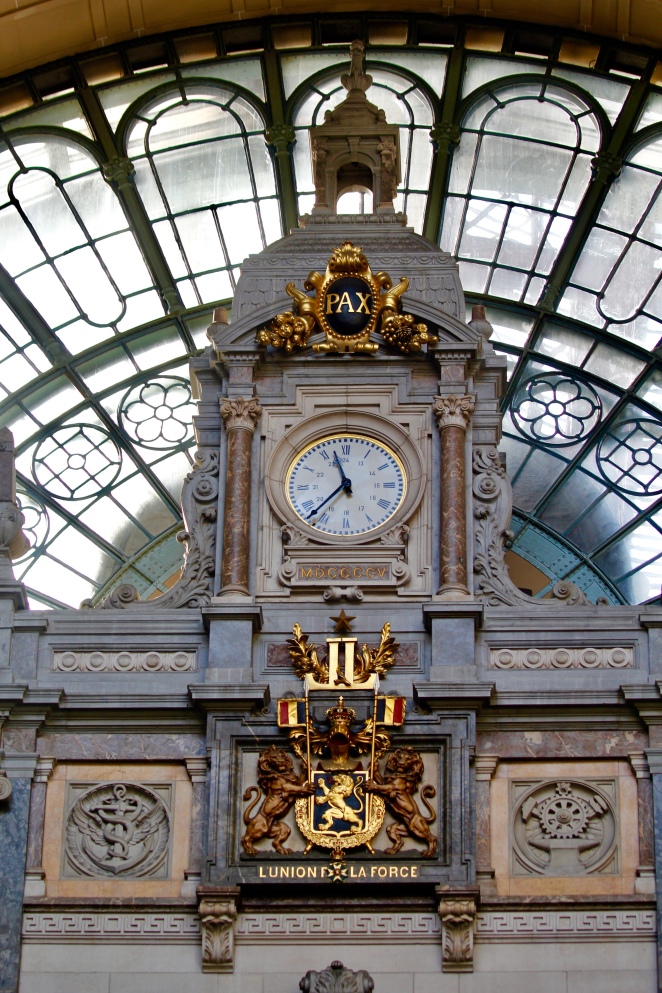 We bought our train tickets (the ticket for seniors is literally twice the size of an adult ticket. Like large print), cuddled a cute dog, then hopped on a train for the 50 minute trip south. My cousin Dominique had said that in Brussels they tend to speak French rather than Flemish, so I mentally prepared to re-dust off my already dusty French lexicon.

The Brussels-Central station drops you off pretty much in the middle of the old town, so we walked through the train station, by the art nouveau Belgian Comic Book Station to our first stop, Les Galeries Royales Saint-Hubert. 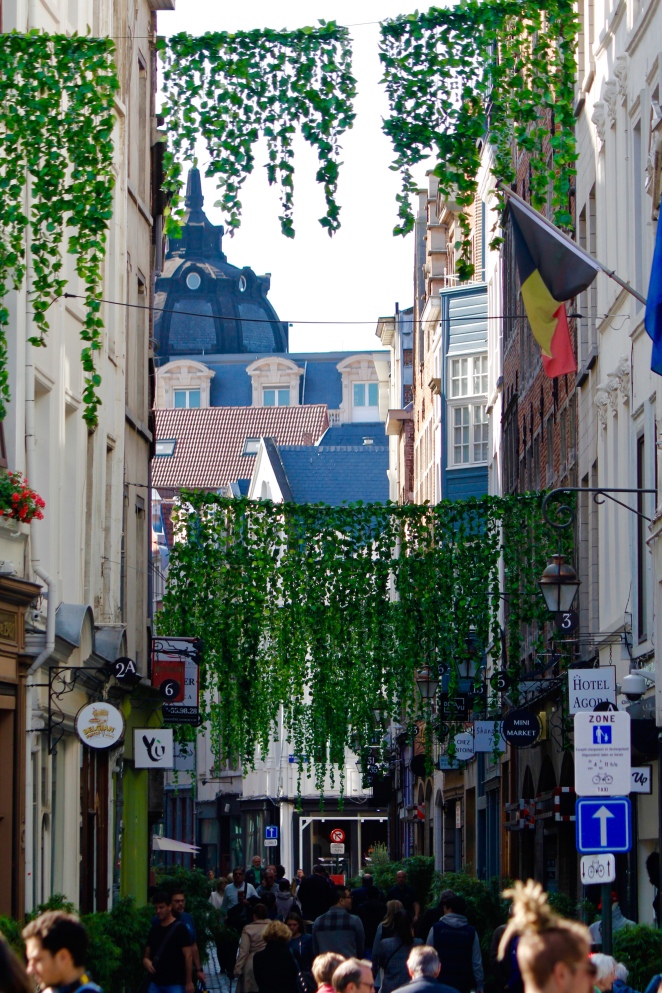 The Galeries is a long glass-covered arcade, lines with fancy jewellery shops and chocolatiers. We walked up and down, sampled some chocolates and picked out which watch costing tens of thousands of Euros we would choose.

We then headed to the Grand-Place. Full of tour groups and school groups, gilded with gold ornamentation and quite literally smelling of waffles, we walked around the square and decided which sunny patio we wanted to occupy for lunch. 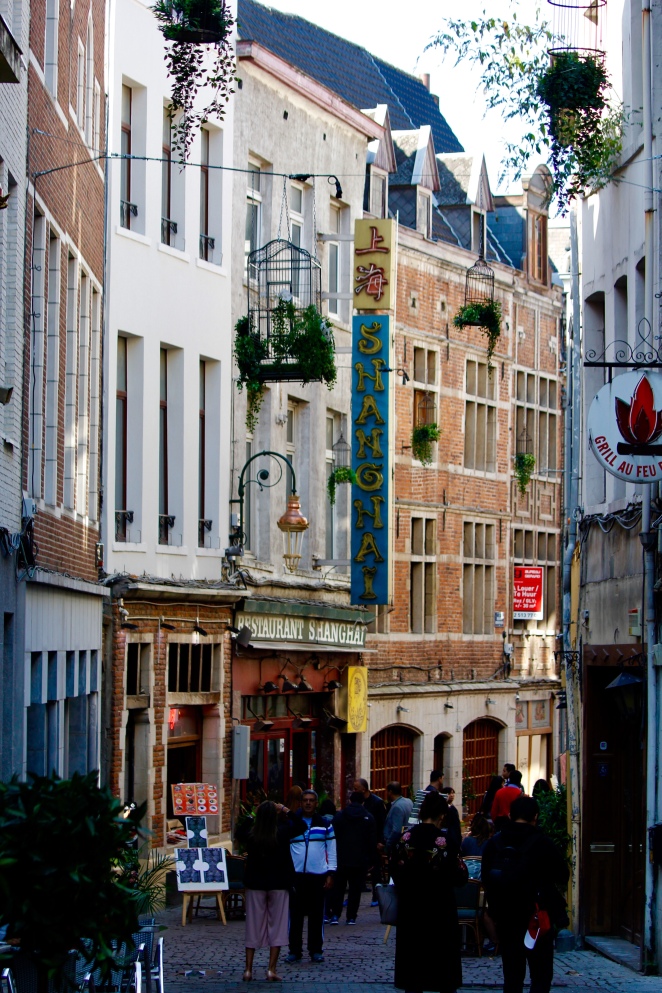 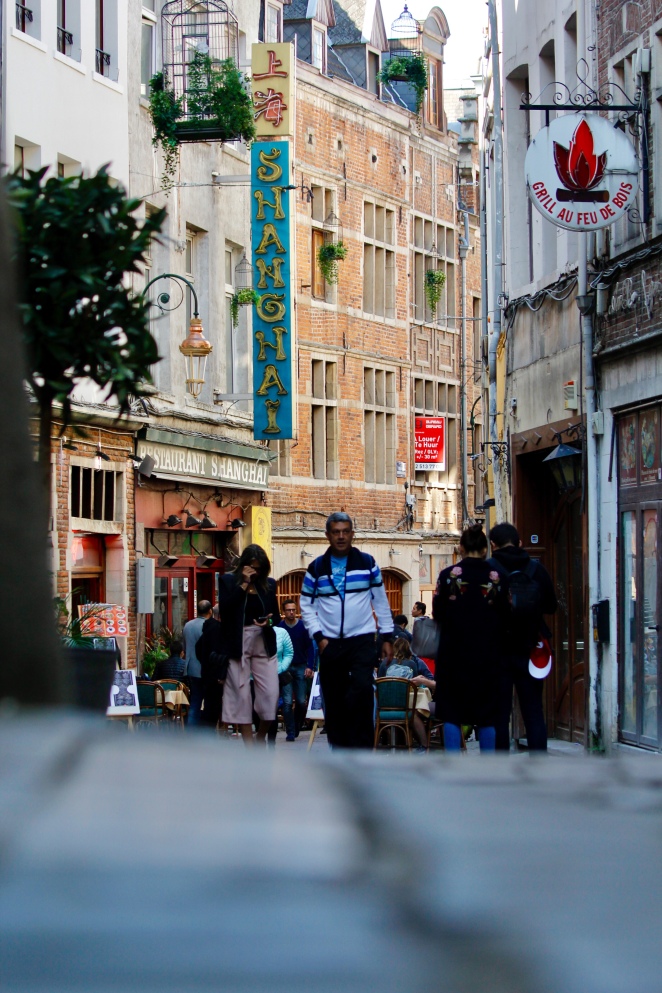 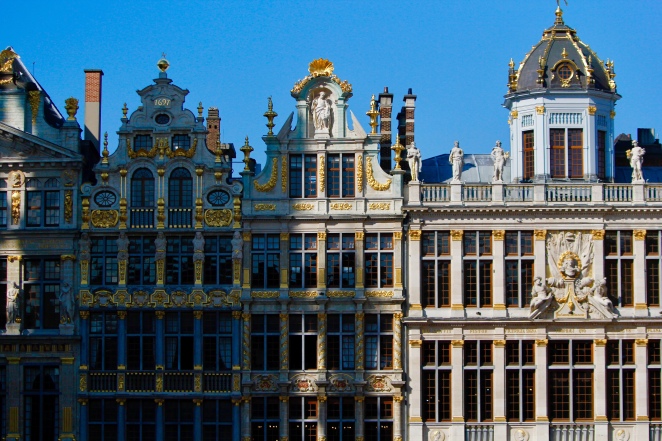 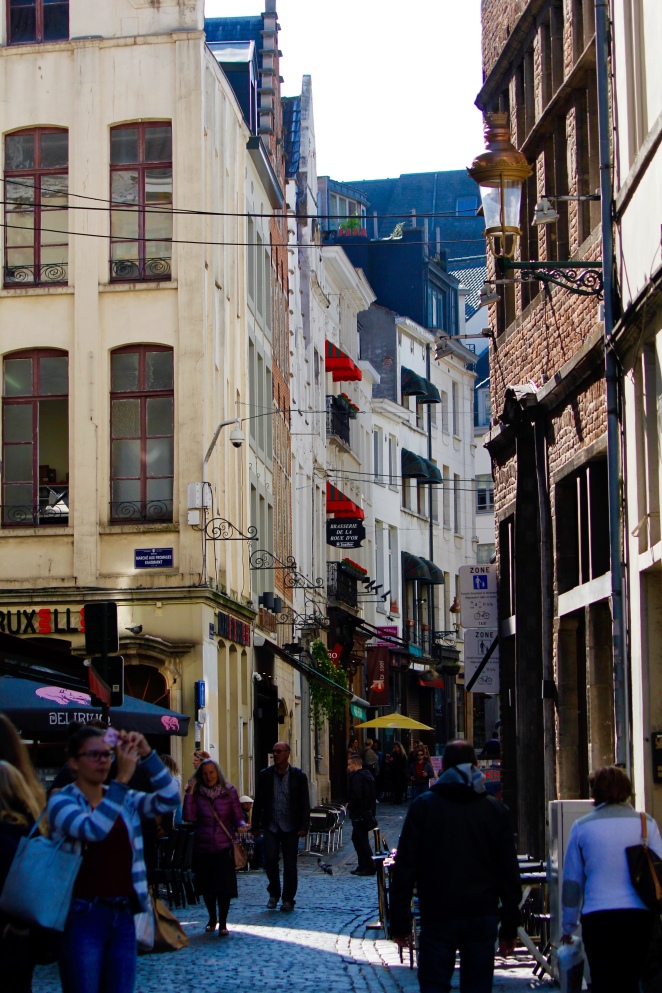 We found a Rick Steves recommended restaurant, squeezed into the patio and enjoyed some beer, pizza, and Ma tried a Brussels waffle, which she said was markedly different from the sweeter Liège waffle. 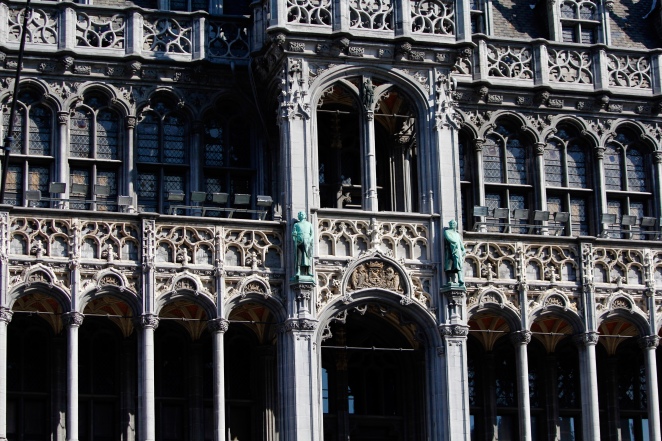 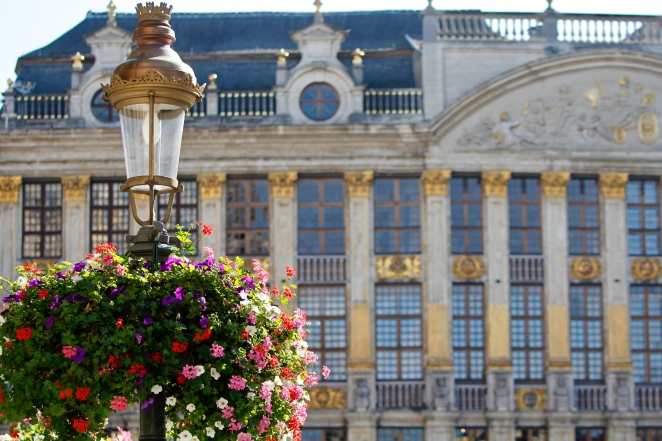 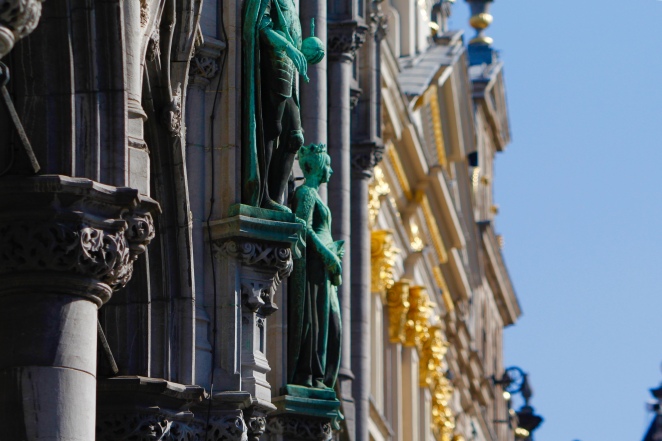 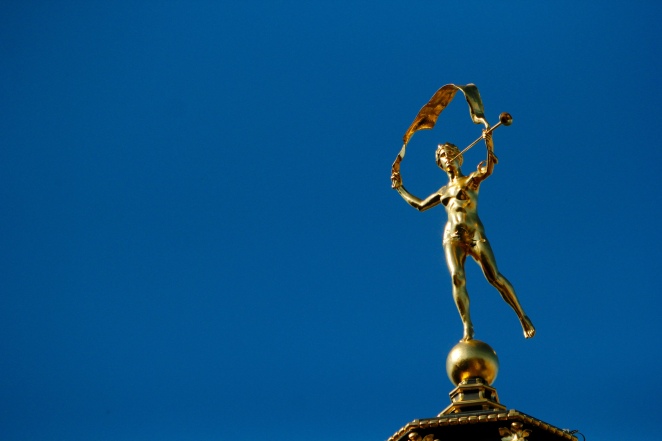 We finished up our lunch and I wanted to see Mannekin Pis, the statue of the little boy peeing. On the way we noticed the Tintin Boutique. For those of you who don’t know, Tintin is the comic book character created by Belgian cartoonist Georges Remi, better known as Hergé. I picked up some Tintin postcards and a Tintin planner and we went back to the streets. All along the street was waffle shops, beer stores, chocolatiers, and souvenir hawkers.

We reached the Mannekin Pis, underwhelming as he was, dressed in a jaunty outfit. 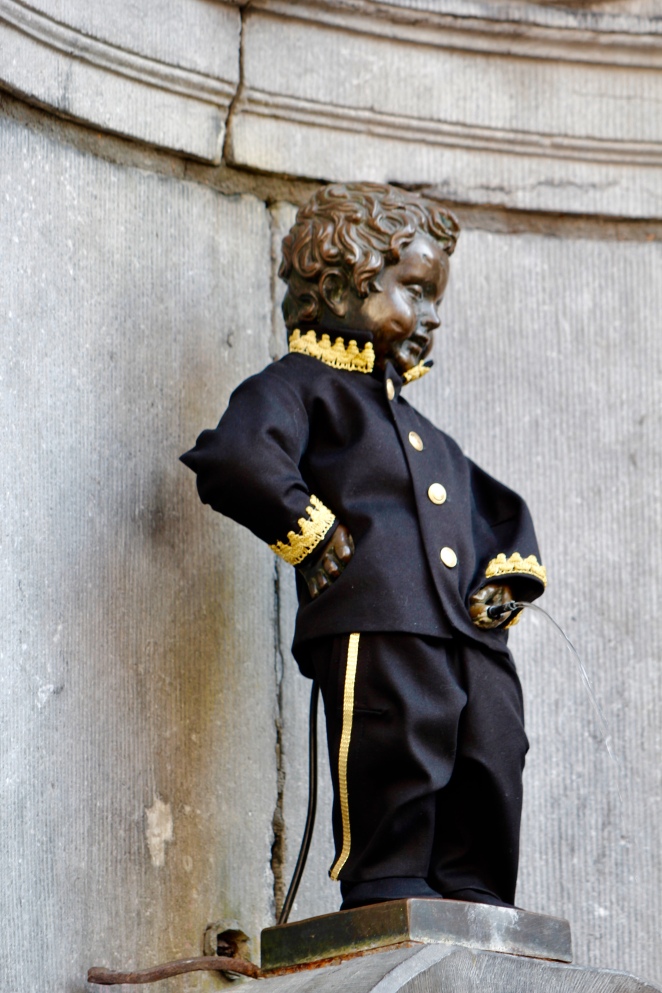 Our final stop, which I almost forgot about, was the Delirium Café. We walked through the Grand Place, again through les Galeries, turned off and down what was more than a café, but a Delirium block. 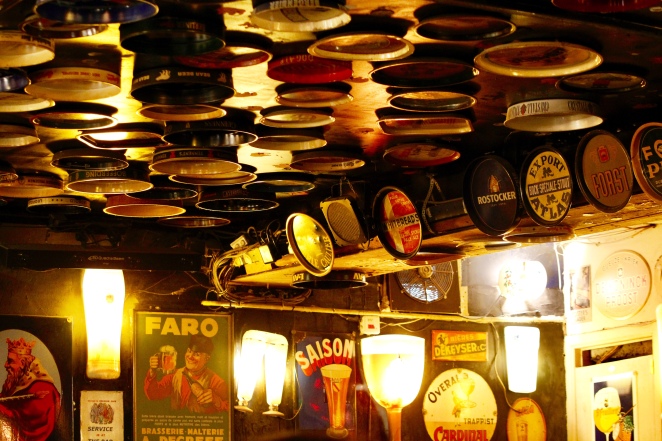 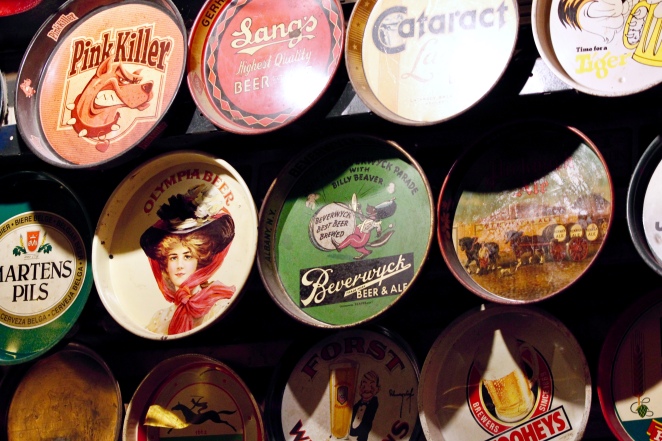 Pa and I decided on the Beer Cave, which boats over 2004 different beers available. I had a Delirium Red on tap and hiked along to Free Bird, which started playing on the sound system.

Pa and I could have stayed down there forever, but Ma wasn’t quite as keen as we were, so we headed back into the real world and the sunshine, and back to Antwerp for dinner and bed.