This morning we were up bright and early (brighter and earlier than we intended as we’re still on incredibly jet-lagged) as we wanted to walk the old city walls and ramparts, and we wanted to do it before the crowds as before the heat got too oppressive. The walls are the most recommended thing to do and we didn’t get a chance to walk them during Dubrovnik 2014, so we made sure we did them this time.

We got to the entrance by the Ploče Gate by 7:55, and it opens at 8:00, which we’ve learned by now is merely suggestion, and not a hard and fast rule. We were 2nd in line with a queue already forming, and the poor gate worker could not get the ticket machine working. It’s not something he could just wave people in for free – entrance is about $20CAD. After about 10 minutes of fumbling, trouble shooting and calls to what I assume is Croatian tech support, the poor significantly sweatier man got the machine working, and we were through. 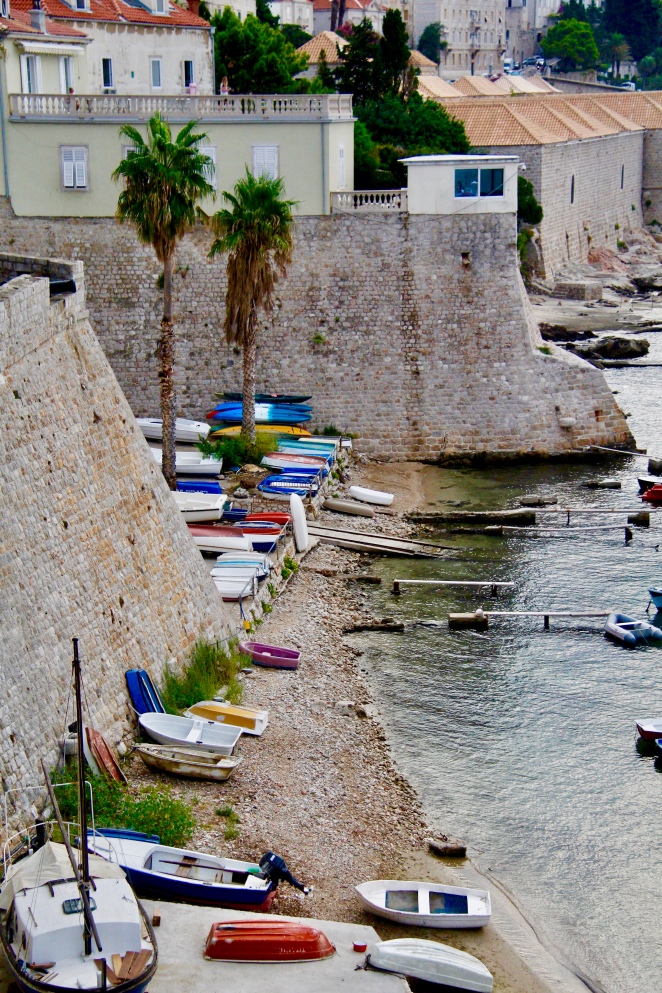 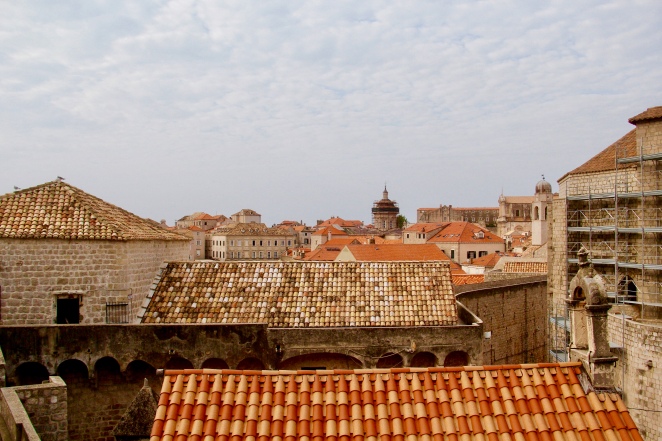 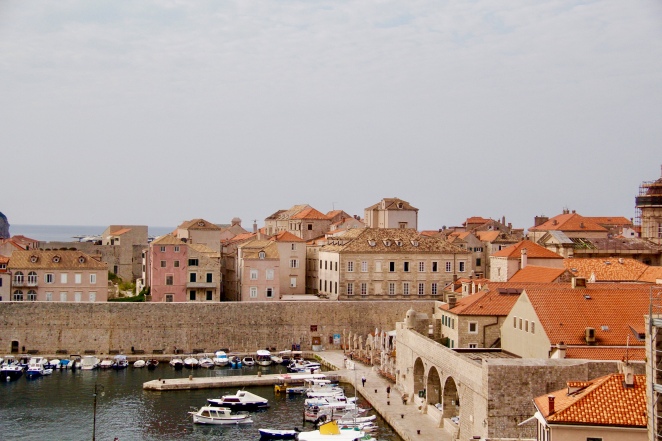 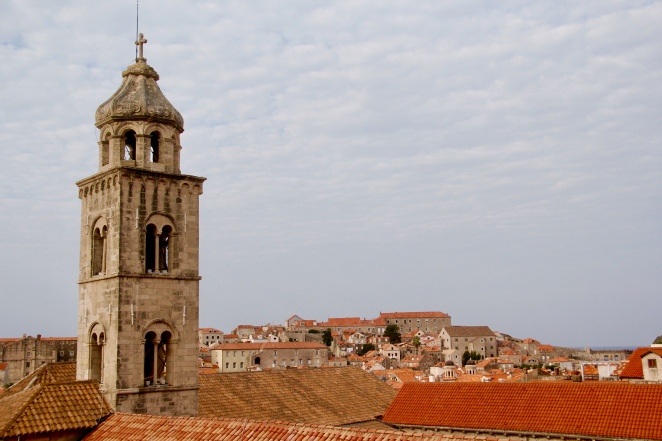 The walls were originally built in the 9th century and further fortified in the 14th century in order to keep out the Turks (a common theme in the area). You can also see the difference in the orange tiled roofs – faded tiles are obviously older, bright orange indicates the roof and/or building didn’t survive the significant shelling during the Balkan War of the 1990s. 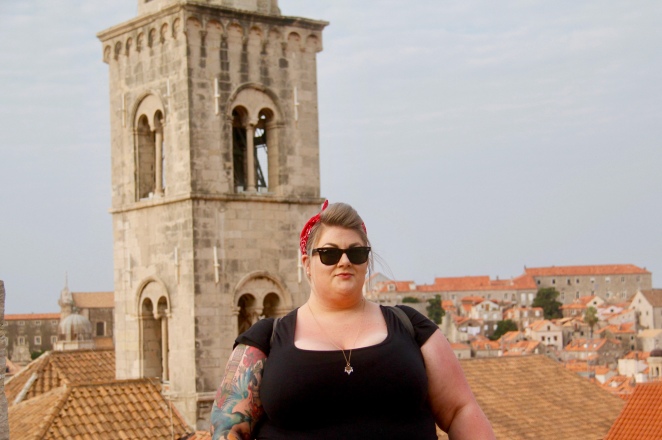 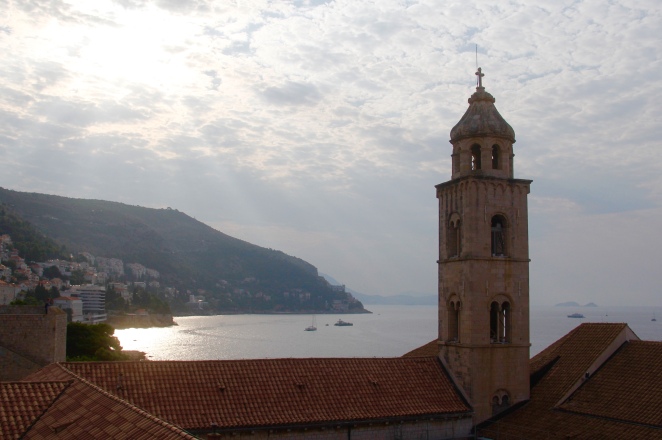 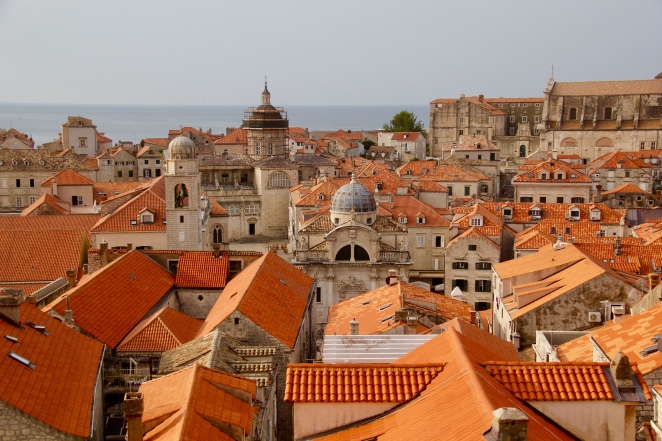 The walls are almost 4km with lots of stairs and ramps along the way, and for someone whose limbs can best described as “dachshund-esque”, some of the stairs were pretty challenging. The views made the blasting of my quads, hams and glutes worthwhile, with a total panorama every step along the way. 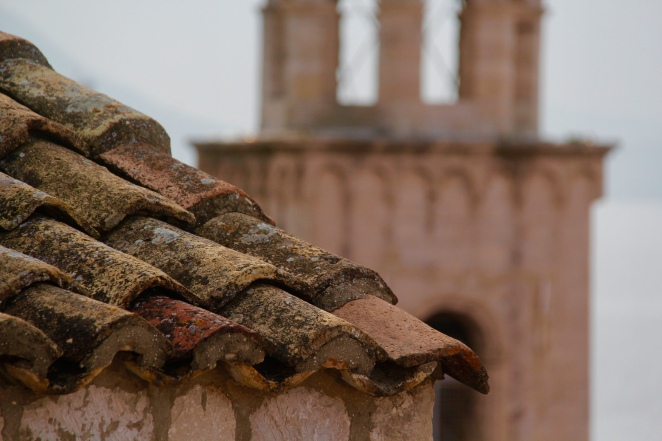 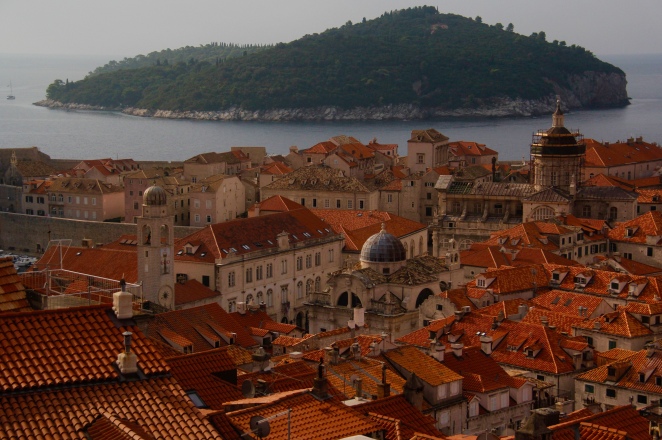 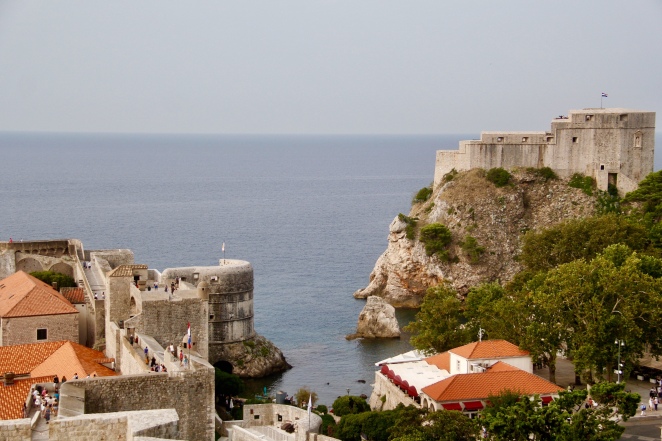 One thing I always think is interesting when huffing around in 29 degree weather is the fashion. When I travel I wear pretty basic clothing – black pants, black low-cut top – the Kelly uniform. There were women in sky-high espadrilles, women in unflattering tune tops, women in shockingly short dresses, schlepping their shit up all those stairs. If they can stay cool and comfortable, more power to them.

The sun started to really punish us, so we stopped at one of the many refreshment stands along the walls for some orange juice, but were swiftly talked into some “signature” drink there. Turns out, this pink concoction contained not only oranges, but also beets and carrots. Not super refreshing or tasty, but very healthy. 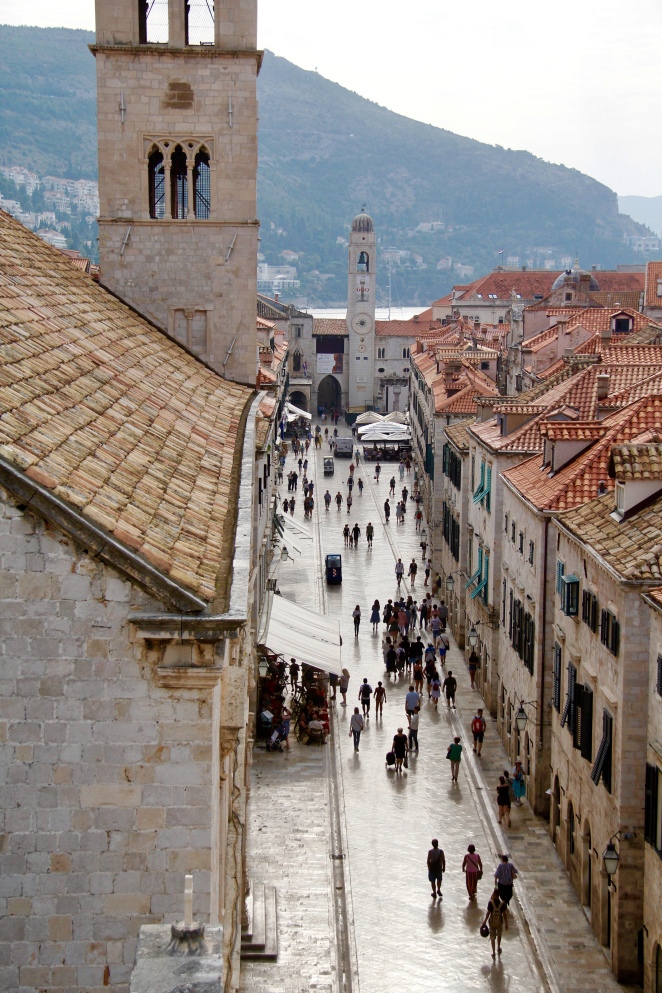 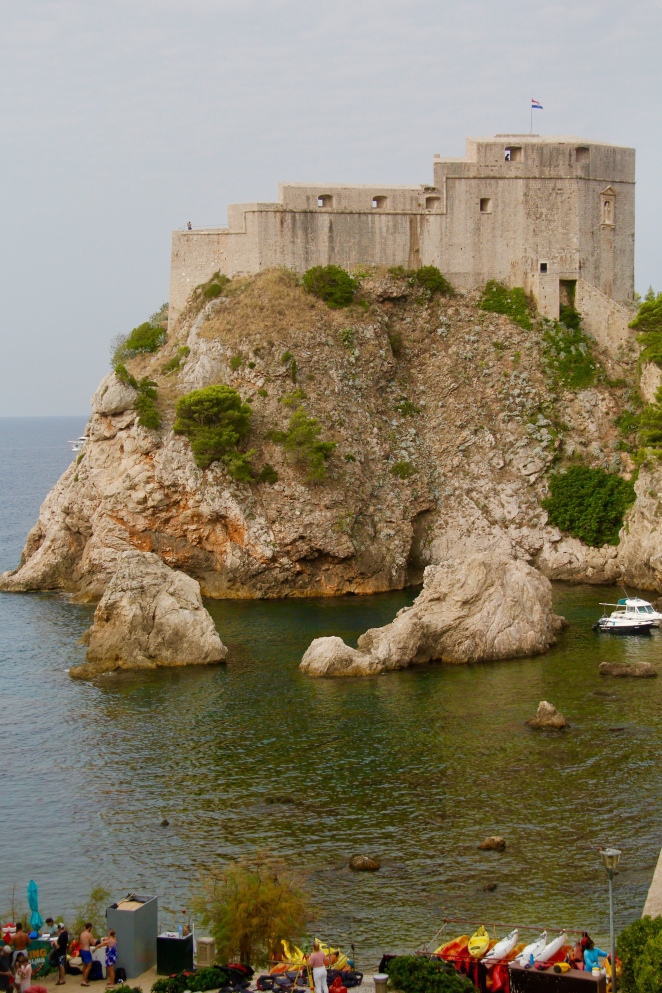 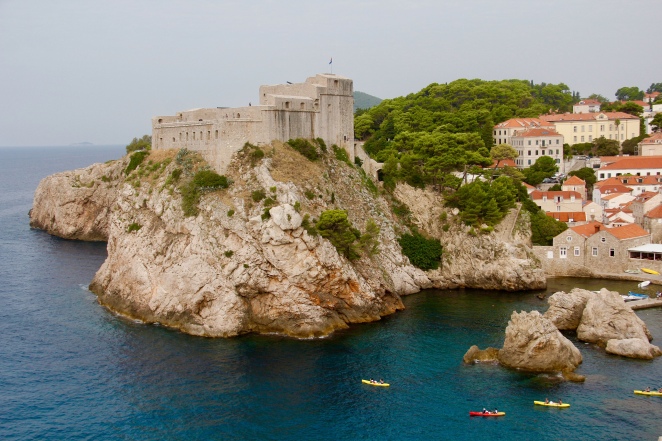 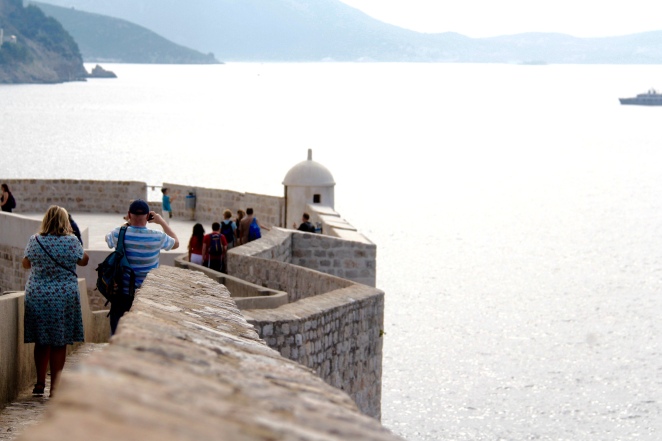 The wall walk ended up being more interesting with more beautiful views than I was expecting, so I’m glad we did it and would recommend it to visitors! It’s supposed to take about an hour, but it took us two, as we stopped a lot to take what felt like the same photo 30 times.

It was a little after 1000hrs when we exited the ramparts so we decided to get a lot of water and coffee as well as some brunch in a beautiful restaurant that faces the marina so that we could people watch and watch the boats come and go. The coffee was delicious and our water looked like Croatian Javier Bardem. 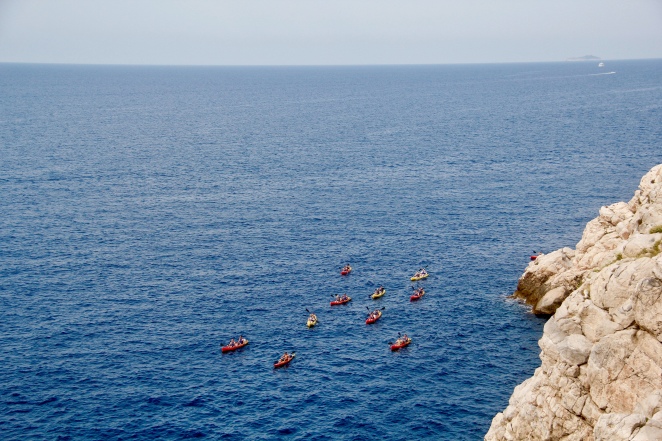 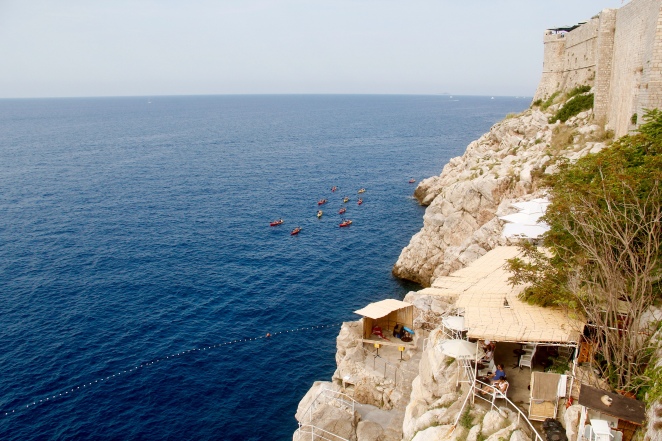 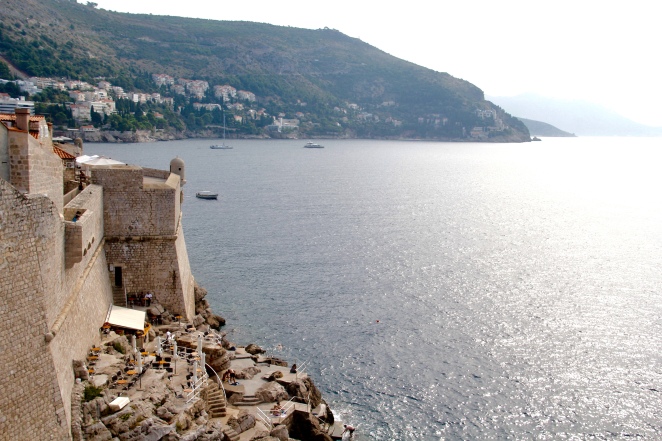 The rest of the day was a relaxing one. We left the marina and headed for Buža 2 – another bar built into the rocks on the outside of the wall. They didn’t have the lemon beer that Pa and I have come to love, but they had cold beer and beautiful views in spades. 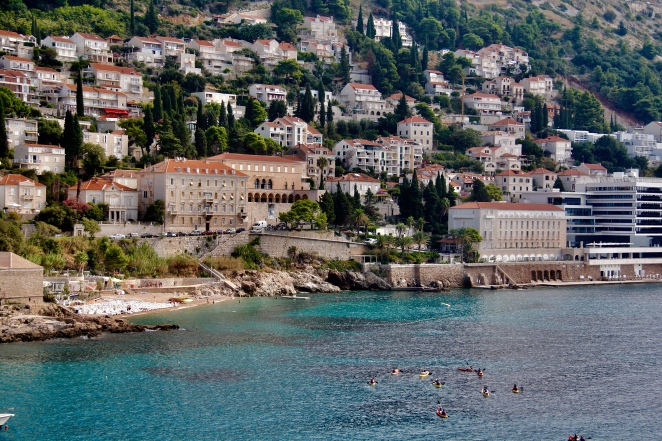 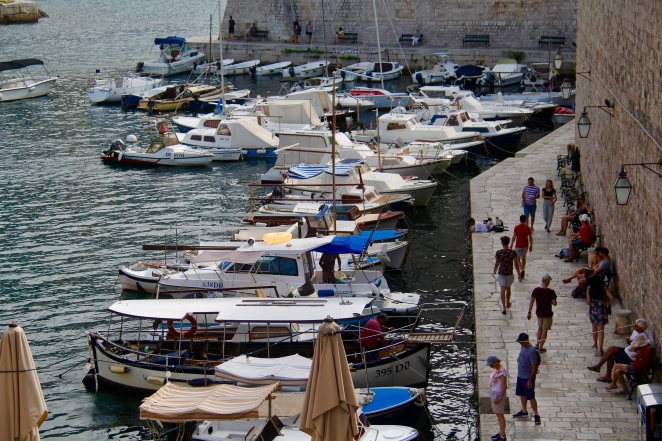 After our drinks and a mid day siesta, we went to a tobacco shop to buy some stamps and then set up shop at one of our favourite people watching restaurants along the stradun where we sipped more beers and I wrote and sent some postcards to some of my nearest and dearest. Again the parade of people was a fascinating sight – tour groups, bros, a bridal party, screaming children with disinterested parents. After dinner, we headed to back to our apartment around the corner, as it took every last ounce of strength to wash my face and brush my teeth before crashing into bed at the ripe old hour of 1930hrs. 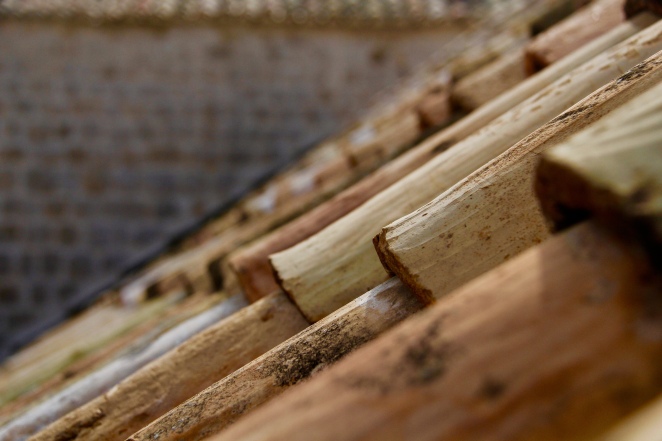