This is my last post of the trip as tomorrow is our last full day and we’ll be just relaxing and I won’t be taking any photos.

We decided to take the day to explore Antwerp. We had a lovely breakfast and headed to the Church of Our Lady, a giant Catholic/Calvinist/Catholic Church in the middle of the old town that houses 4 paintings by Flemish master Peter Paul Rubens. The church also has one really big tower and one noticeably less grand one beside it, as the money had run out and they did what they could to just finish it up. 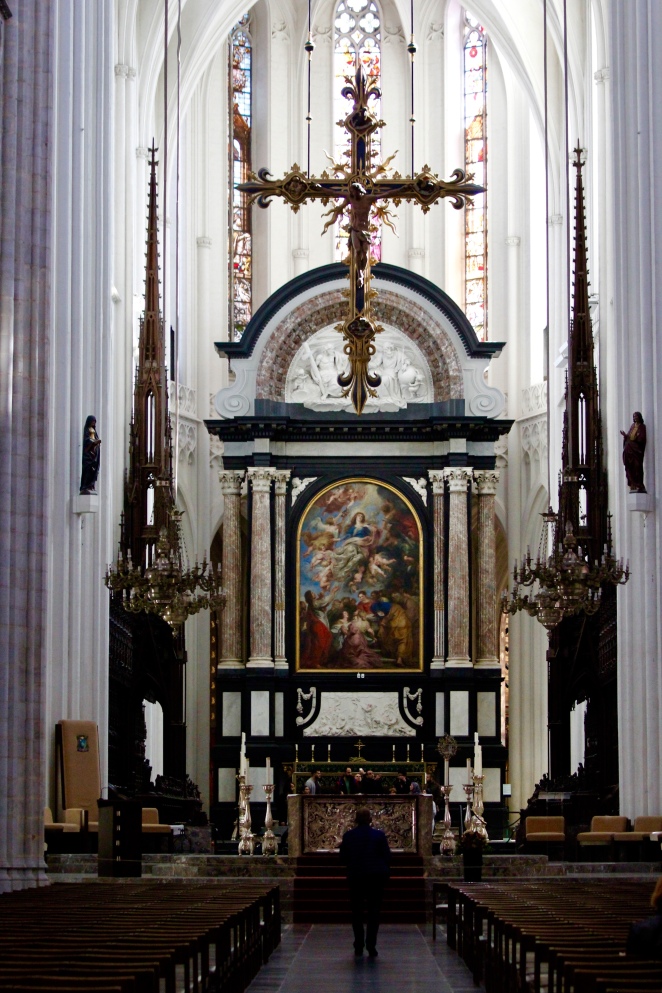 I found the Rubens works to be very dramatic, lots of movement, but not my favourite style of art. The Rubens pieces in the church actually inspires a story called A Dog of Flanders about a boy named Nello and his dog Patrasche who spend all the spare time they can revelling in the beauty of the paintings. The story is very sad and ends tragically, and attracted a Japanese diplomat who brought the story back to Japan in the early 1900s, and to this day is a popular story among Japanese youths. There is a tribute to Nello and Patrasche out front of the church.

After saying goodbye to Rubens, Nello and Patrasche, we headed to the square over, that houses one of the landmarks of Antwerp, the Brabo Fountain.

The story is, is that back in the day there was a cruel giant who lived in the area named Druon Antigoon. Antigoon would guard a bridge along the river Scheldt and collect taxes from those crossing or passing. If you couldn’t pay, Antigoon would rip off their hand and toss it in the river. Finally, a brave Roman soldier named Brabo killed the giant, cut off his hand and threw it in the river. According to legend, in Flemish it was called “hand werpen” (hand + to throw), which is how the city got its name of Antwerpen.

We hung out with Brabo, then decided to grab some lunch and a beer in the sunny square. 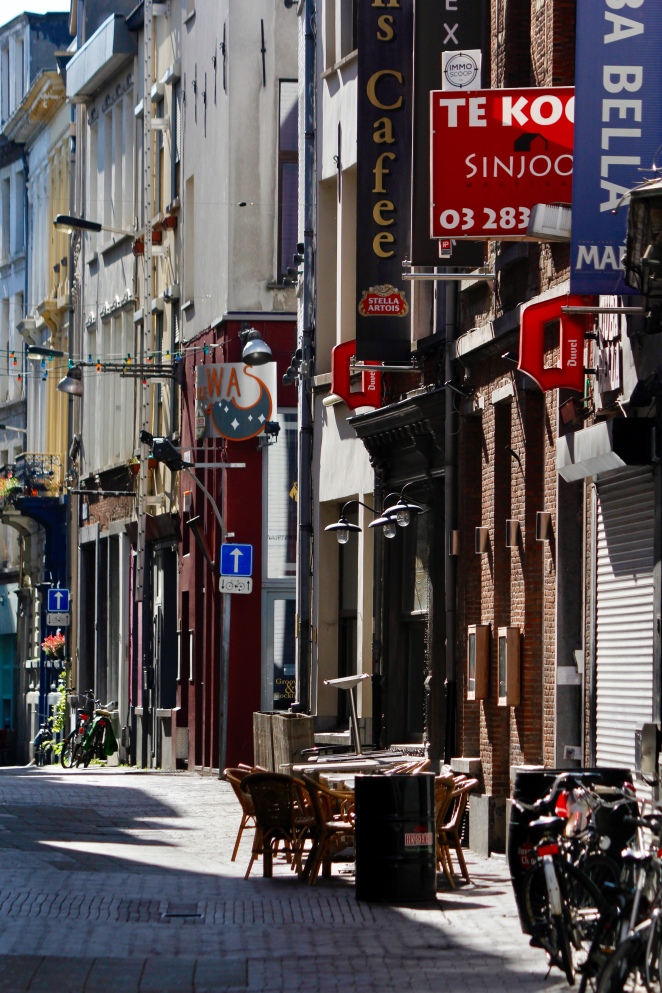 Following lunch we headed to the river side and took the old clacking wooden escalator to St. Anna’s Tunnel, a 900m under ground tunnel that takes you under the river. We considered walking the length of the tunnel, but the cyclists zipping past us made us nervous, so we went back to the surface. 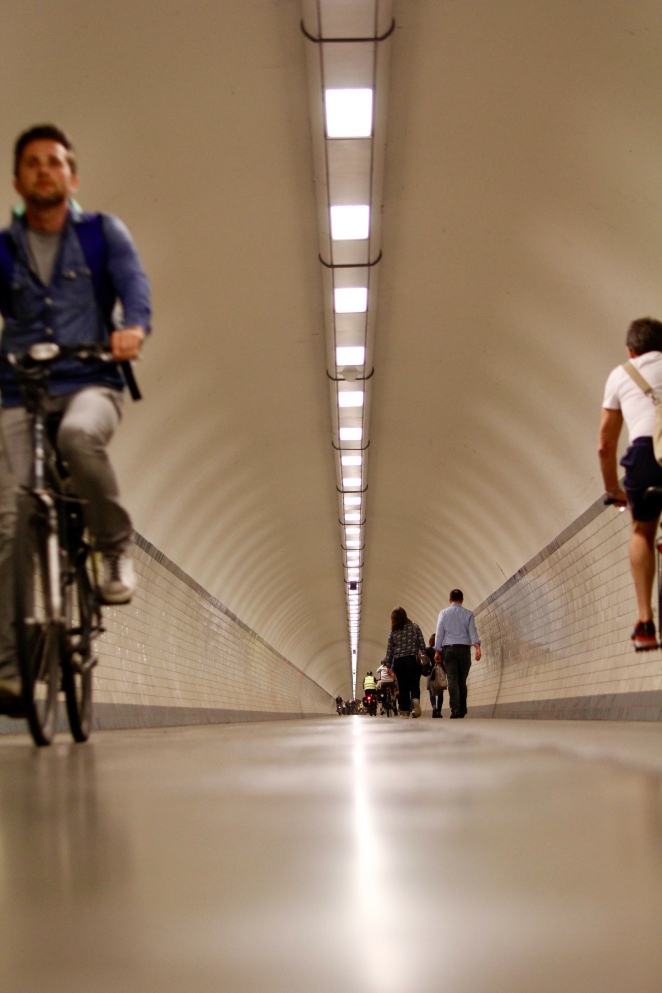 We headed further north to the industrial/port area of the city, where stands a gleaming modern structure of brick and glass, the Museum Aan de Stroom, or MAS. 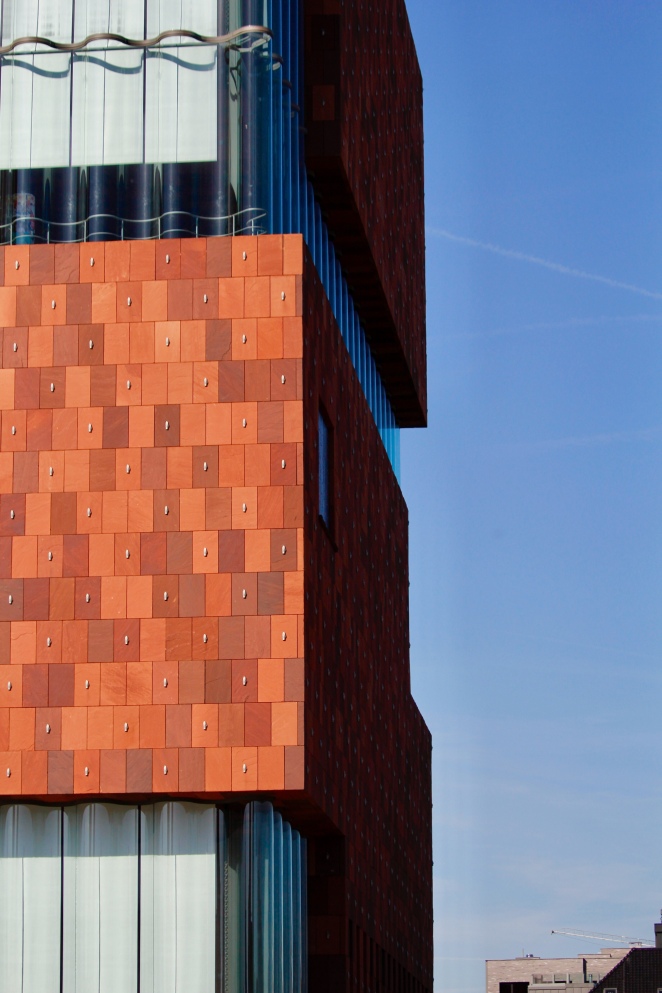 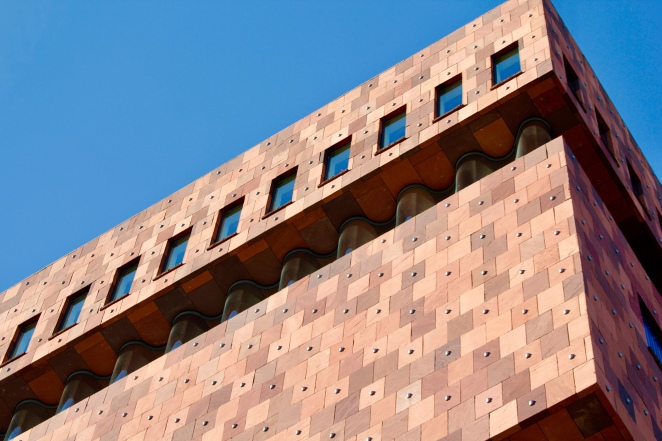 MAS is 10 floors of art exhibition, from the Flemish Masters to modern photography. The sun was pressing, so we tucked into the MAS cafe for a beer and some ice cream. The roof of MAS is a free panorama, and Pa and I wanted to check it out (Ma wanted to stay more grounded), so we took the 10 escalators to the very top and looked over the rooftops of Antwerp. 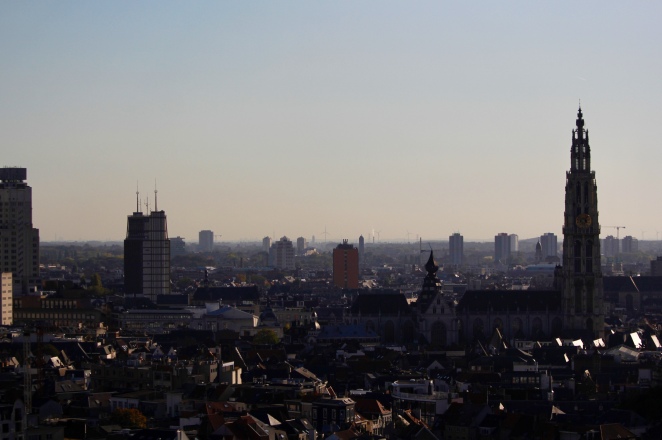 Back on solid ground, we walked back into the old town, to a restaurant where we had reservations for dinner with our cousin Dominique and this time with his wife Els, daughter Eva, son Cédric (my 3rd cousins), and Dominique’s parents (who would have been 1st cousins with my grandfather Joseph). We drank beer and dined on Flemish classics (stoofvlees, a beef and beer stew served with frites) and got to know each other better, share stories and DeCaigny history and characteristics. We ate dessert and drank coffee, took photos and sadly parted ways, my head buzzing with the connection I had made with a family member I just met this week.

Sunday afternoon we fly out of Schiphol, 11 months until our next European sojourn. Thanks for joining me this year.

Today I took 1 photo on my camera and we didn’t really do much worth writing about. But here I am, nonetheless.

This morning we slept in a little, had breakfast said goodbye to Varlet Farm as well as Ypres, Poelkapelle, Zonnebeke, and Passchendaele as we loaded up the car and headed an hour north east to Ghent to drop the car off (so glad we were able to return it un-dented and undamaged). We grabbed a cab to the train station and took the hour train ride, again north east to our final destination, Antwerp. The Antwerpen-Centraal station is gorgeous (photos tomorrow) and we had lunch in a delightful café in the train station and looked for a cab on a street lined with diamond shops.

The cab ride to our apartment was unpleasant – when we gave the driver the address, he said it was 1km away and chastised is for wasting his time and losing his place in line. We offered to get out but he passive-aggressively groaned that we could stay and he would drive us. After notably much further than 1km, we arrived at our apartment with our delightful host Arthur waiting outside. We begrudgingly paid the driver and schlepped our shit up the 4 story walk up to a wonderful, bright and modern apartment. Arthur wrote us a wonderful list of sites and restaurants, and we tucked in for the night, snacking on baguette with salted butter, ice cream and beer. 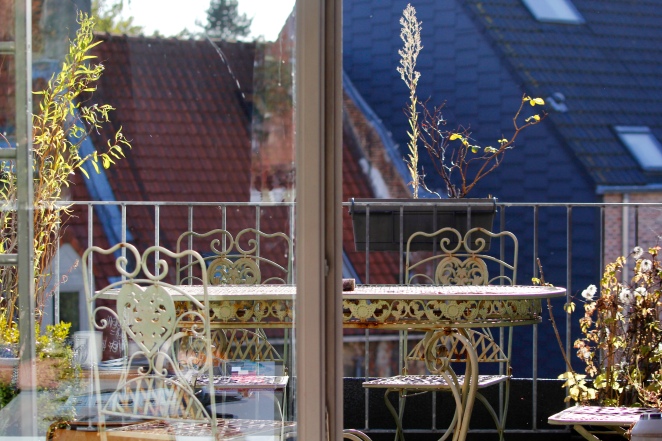