Today was another war day, focusing on WWI and the involvement of Canadians in the Ypres-Salient.

Our first stop of the day was Tyne Cot Commonwealth Cemetery. Tyne Cot is the largest commonwealth cemetery in the world and is the final resting place for 11,965 Brits, Scots, Irishmen, Canadians, Australians, New Zealanders, Indians and more. Of the almost 12,000 graves, 8,369 are unnamed, and just bear the phrase “A Soldier of the Great War”. Along with the graves there is a wall that stretches the width of the cemetery and on it is written the 34,959 names of the men who are unaccounted for. 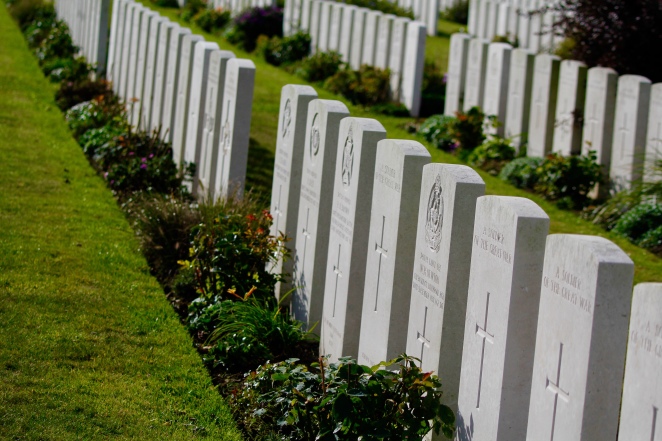 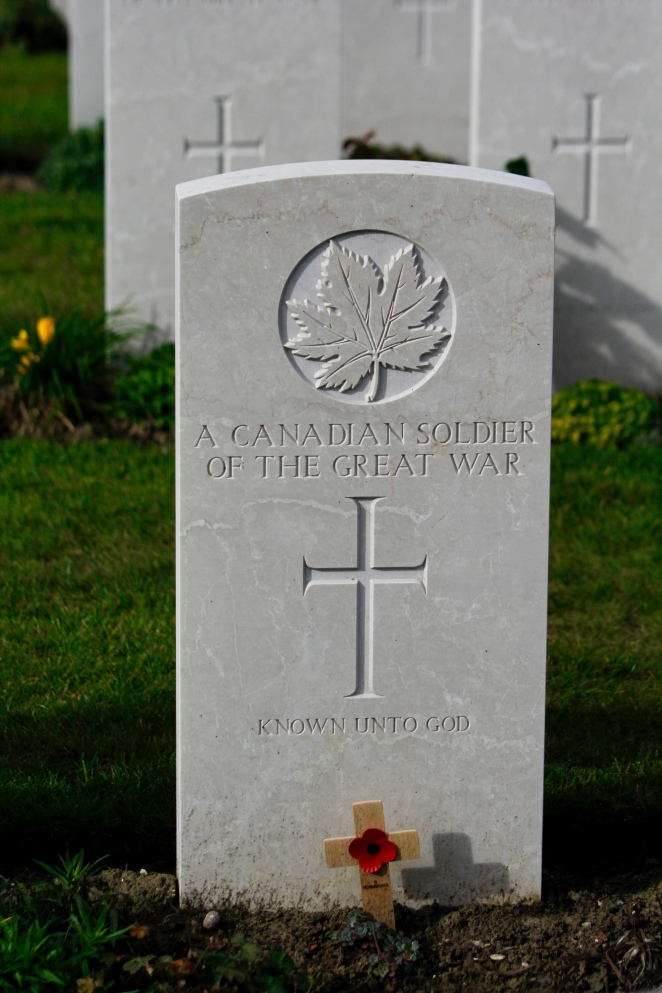 After braving the elements and finding a possible relative of Ma’s on the wall, we headed to the next site, the Canadian Passchendaele Memorial. At the front of the Memorial is an iron gate, and there is an identical one in Halifax, Nova Scotia that was the last steps soldiers would take in Canada before being shipped off to war.

The main part of the Memorial is a concrete slab on a mound, honouring those who fought and those who died in the second battle of Passchendaele. 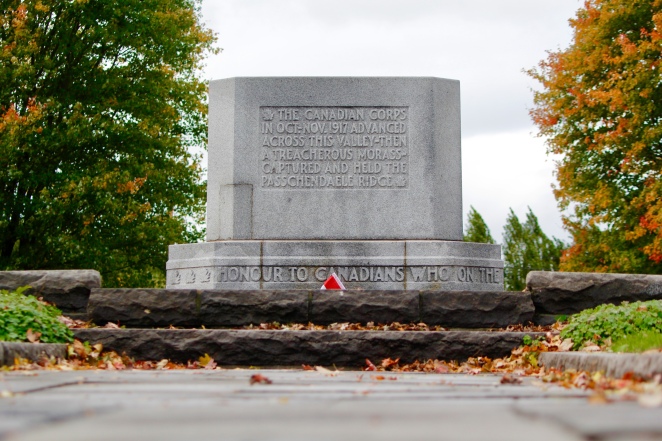 The next stop was a monument that was the runner-up for the Vimy Ridge design, called the Brooding Soldier. This monument was erected at what was once known as Vancouver Corner, but is now Sint-Julien Memorial, and it is where when the Germans released the first gas attack, the Canadians held the line. 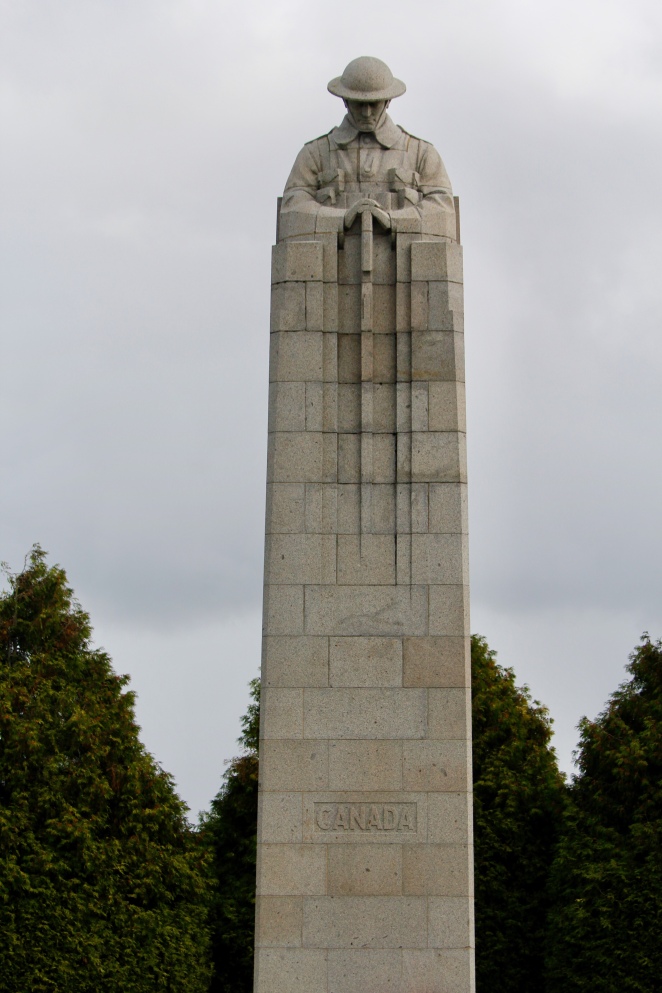 Finally, we drove the short 15 minutes into the downtown of Ypres. We parked the car in the market square, had a long leisurely lunch, and went to the In Flanders Fields Museum, a very thorough look at WWI in the the city’s cloth hall. 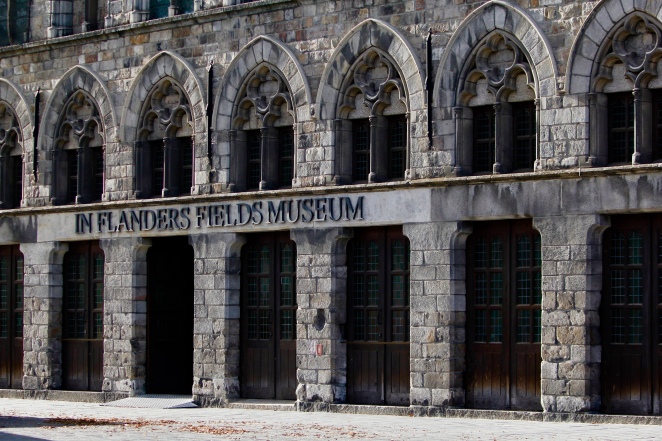 The museum was enormous, comprehensive and interactive. We didn’t realize quite how long we’d been there for, as pretty soon we heard on the loud speaker they would closing in 20 minutes. We finished what we could and headed out to take in old Ypres. 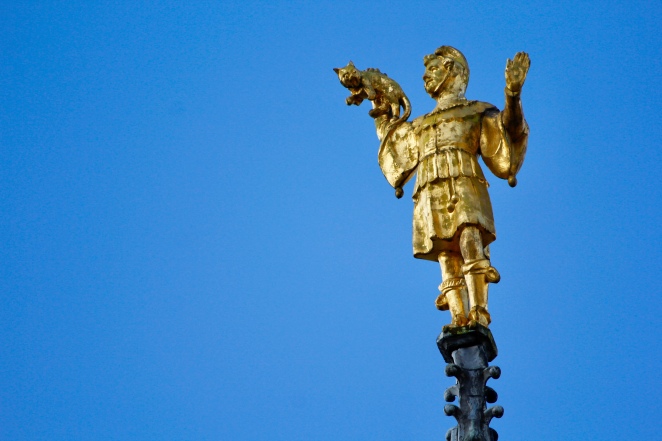 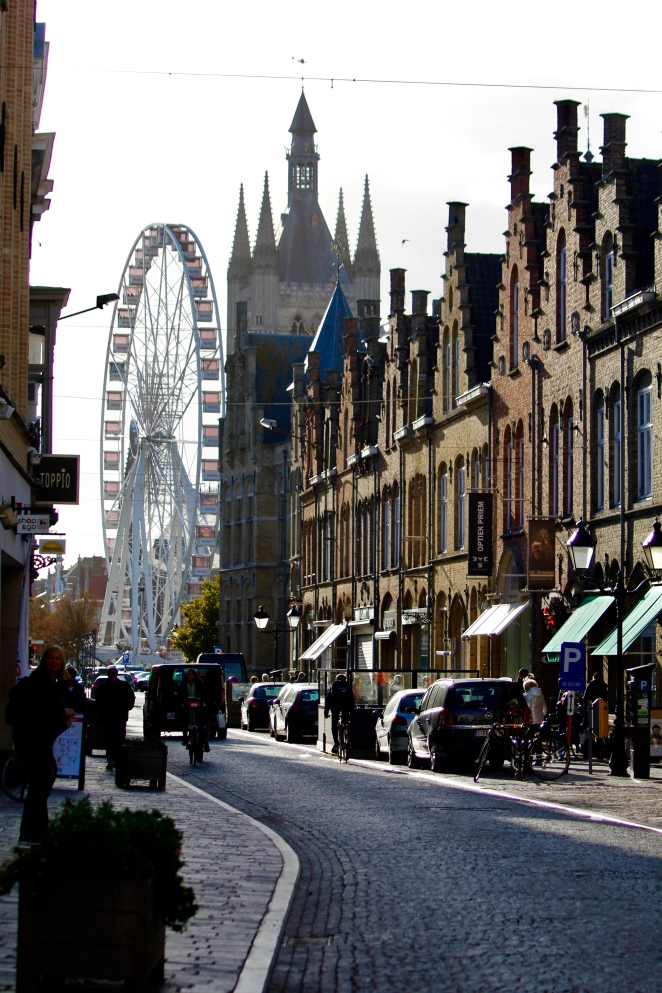 We walked down the main street to the Menin Gate. The Gate was built in 1927 to commemorate those British and Commonwealth soldiers who died in the Ypres-Salient in WWI and who had no known grave. They initially though the gate would be large enough to hold the number of the missing (54,896 inscribed on the Gate) but they ran out of room, which is why there is the memorial wall at Tyne Cot.

There is a ceremony that takes place at Menin Gate at 2000hrs every night which we wanted to see, but we had a few hours to kill, so we tucked into a pub, had a few beers and chatted with the locals before finding a spot at the Gate.

The Last Post has been performed at Menin Gate at 2000hrs every night since July 2 1928 (except during WWII when Ypres was occupied) and our ceremony featured the buglers, then 7 or 8 families laying memorial wreaths of poppies.

After about 15 minutes the ceremony was over, and we headed back to the car and drove back to the farm as the sun set on West Flanders.