Today was a busy day, but we started off at a leisurely pace, finding a nice river-side cafe where we slowly enjoyed our coffee and croissants.  We then hopped on the train heading westbound to Germany’s oldest city, Trier.  Trier was founded in the late 4th century BC by the Celts and later conquered by the Romans under the guidance of Emperor Augustus.  The city is littered with ancient Roman structures and ruins, including an amphitheatre, imperial baths and the one remaining gate to the city (there used to be four): 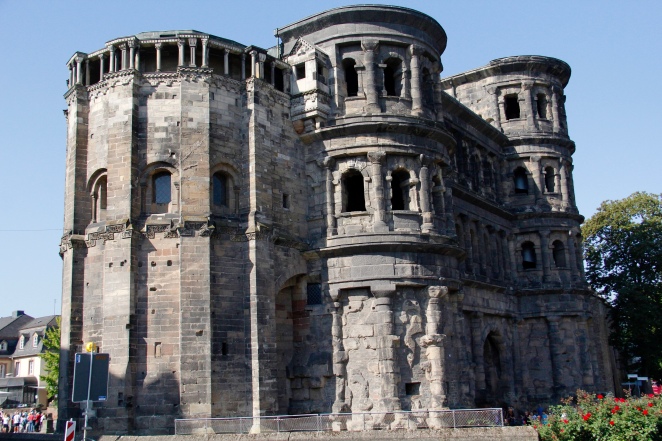 Porta Nigra (which is Latin for Black Gate) was completed in 200AD and served as an entrance to the city.  It was left undamaged by World War II (thankfully) and now stands as one of the best preserved Roman gates north of Italy.

The Porta was originally grey, but time has made it black, giving it its name.  It was pretty cool to be able to go right up to it and touch it, walk through, take a million pictures of it.  It was also our first sighting of my favourite travel contraption, the selfie stick. 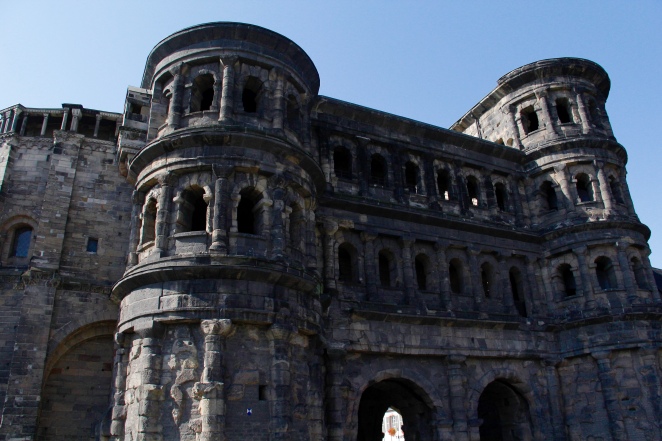 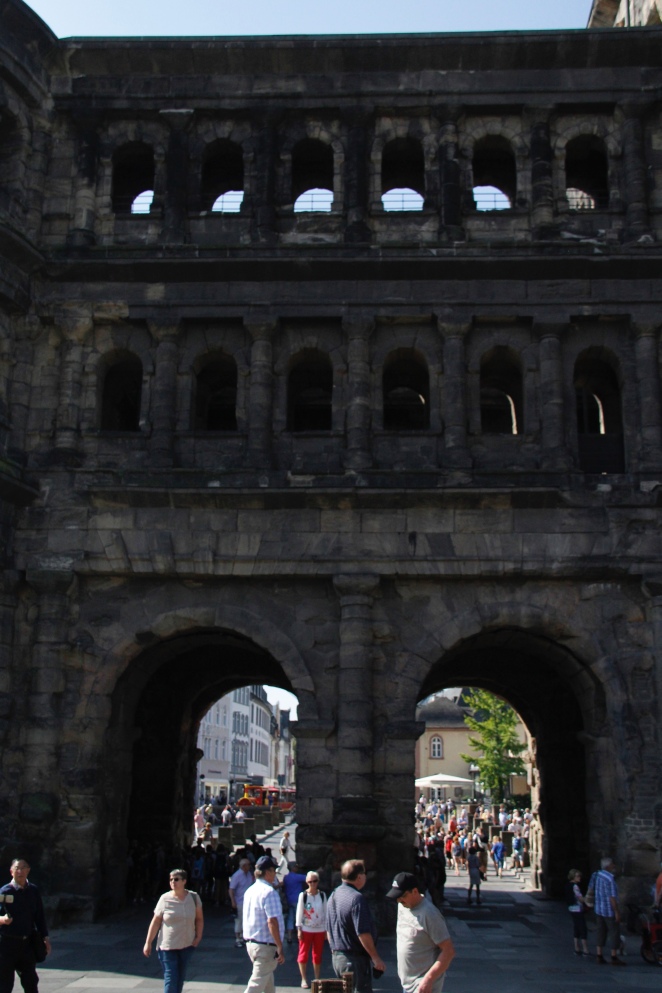 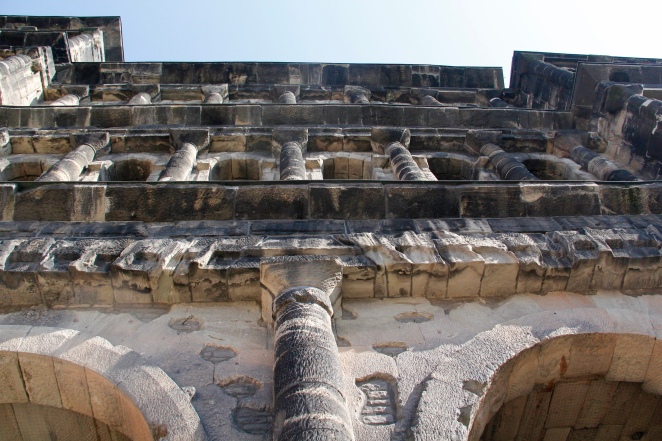 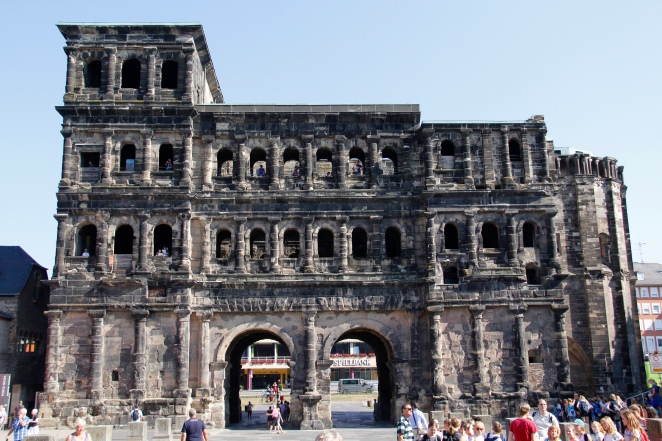 We crossed through the gate and started ambling down the main stretch of the old town, with interesting tidbits along the way, including one of Karl Marx’s former residences:

And this neat old Venetian building where we stopped for coffee (when I told the barista I actually ordered my coffee iced, they just dumped the hot coffee into a cup of ice) and we engaged in one of my all time favourite activities: people watching.  There is definitely more of a younger set in Trier than in Cochem, and some of the older ladies are far more glamorous (not quite as many striped t-shirts with some sort of flower print and gems).  One thing to notice about this cool building is the floating door on the second floor.  There would have been a wooden staircase leading up to it that the homeowner could push over to avoid intruders.

There are all sorts of reminders not only of Trier’s ancient Roman history, but also of its growing pains as a city as there seemed to be a lot of tension between the city-folk and the ruling clergy. 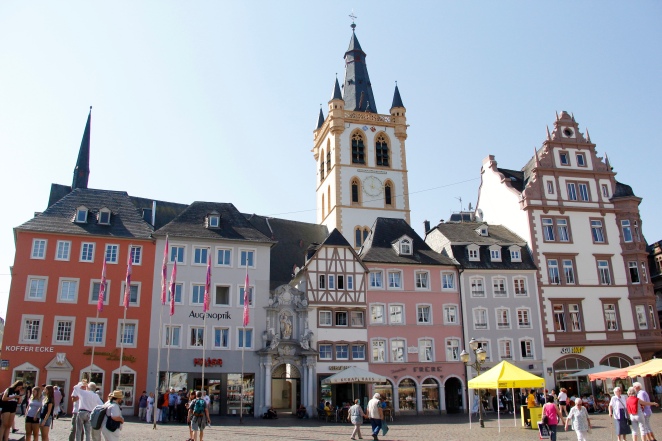 For example, the villagers built their own church  with the spire higher than on the bishop’s St. Peter’s Cathedral and the Latin words below, which mean “Watch and Pray”… 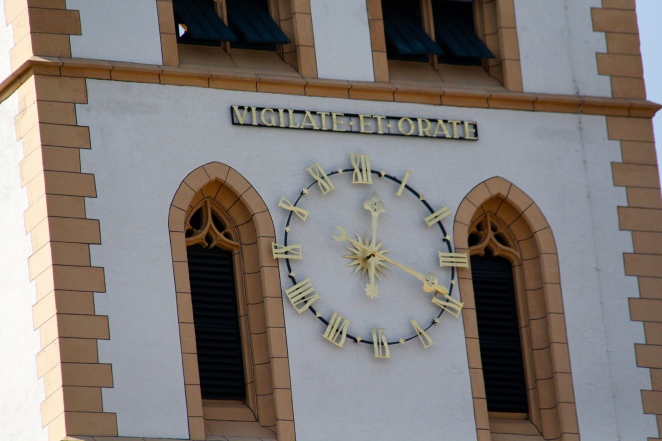 …so the Bishop built an even higher spire on his Cathedral with the Latin phrase “You Do Not Know At What Hour the Lord Will Come”.

St Peter’s Cathedral was built at the same time as St Peter’s in Rome was by Emperor Constantine in memory of his mother Helena who was a profoundly devout woman.  This is the oldest church in Germany and was at one point apparently twice and large and tall. 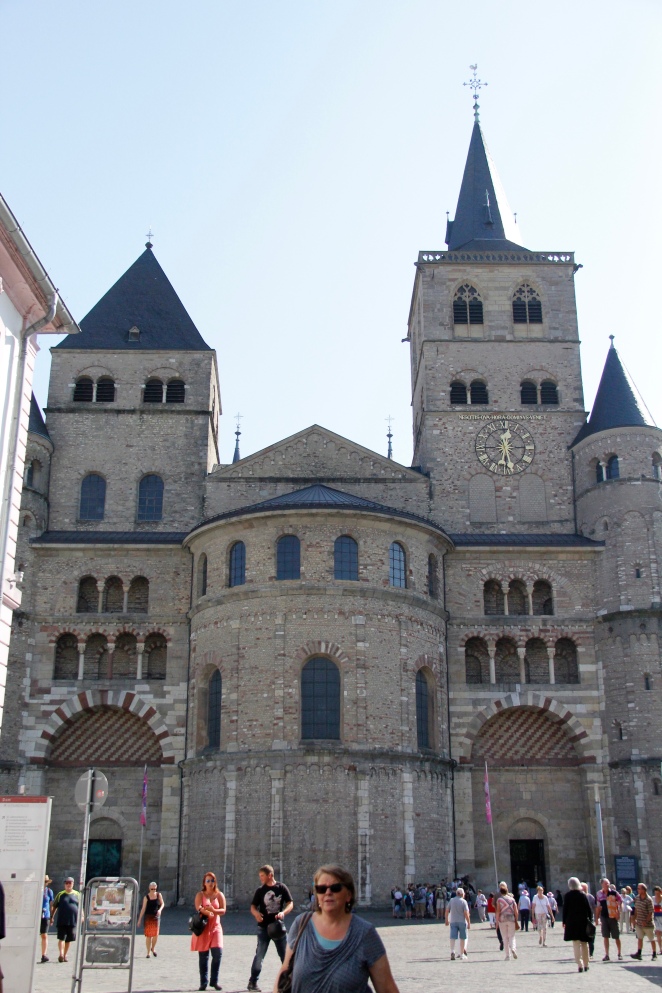 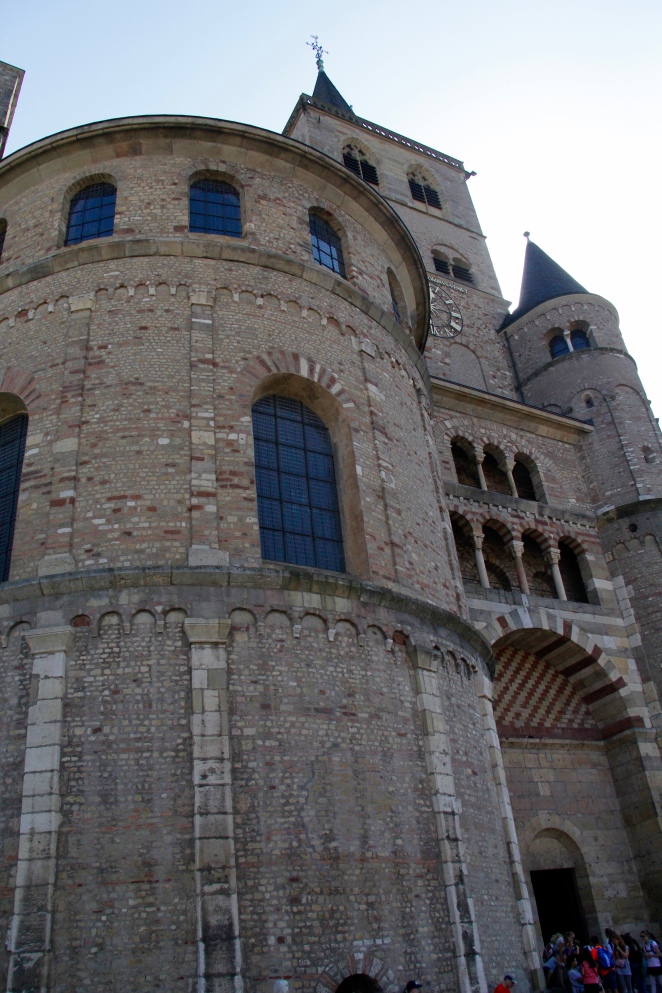 After cooking in the hot sun (only 29 degrees today…) we decided to take a gander inside the Basilica.  Although I am not a religious person, I am still awe-struck by beautiful churches, and I uttered and audible ‘wow!’ when we entered. 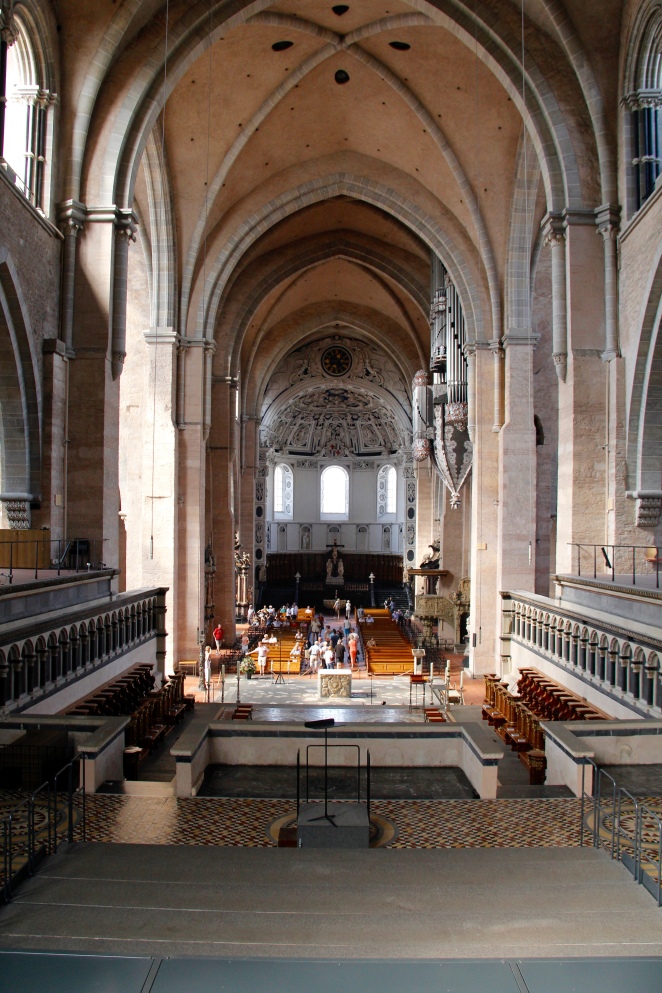 There’s no stained glass, which is usually one of my favourite parts of a church, but here it didn’t seem to bother me.

Thought this window (and not photographed door) is the alleged robe of Christ, which is rarely on display. 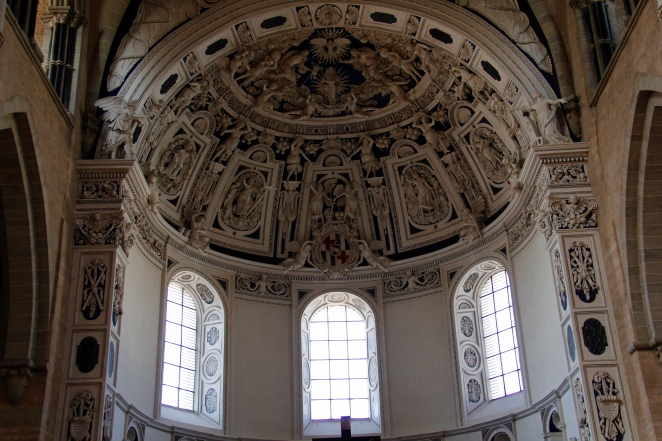 Right beside St Peter’s is the Liebfrauenkirche (Church of Our Dear Lady) which was completed in 1260, so much newer than St Peter’s.  This church was built in the gothic style (my favourite style of church) and sadly the roof was badly damaged in World War II and needed to be replaced. 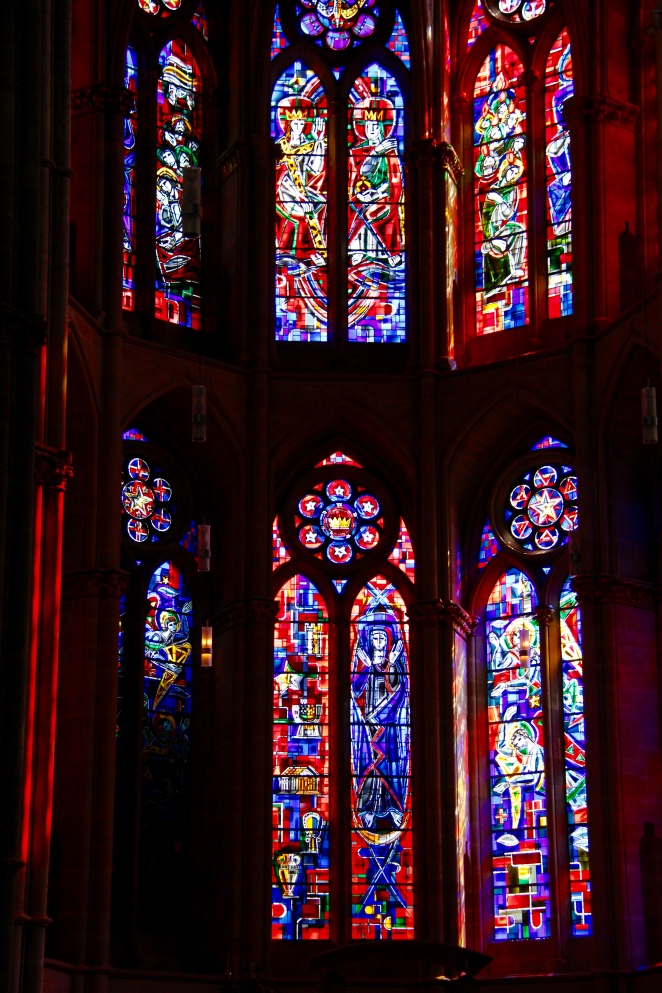 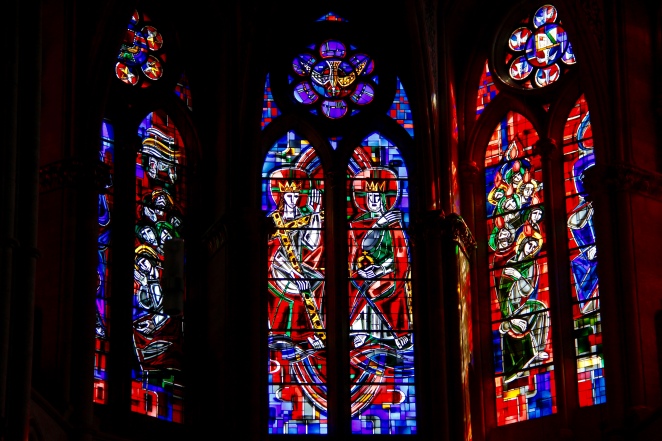 We decided we had seen all we wanted to see in Trier and grabbed the next train westbound, across international lines into the Grand Duchy of Luxembourg.  Things I learned about Luxembourg today: they are a Duchy (ruler is a Duke), you have to be born in Luxembourg to be a citizen (you can’t marry in or take a citizenship test), and Luxembourg has money and lots of it.  We noticed it as soon as we got off the train at the very swanky train station.  Everything was clean and grand, exactly how you would imagine it to be in a tiny country perched on hills and connected by bridges, ruled by a Duke Henri.  Another thing I noticed is that I could suddenly understand most people – I had forgotten they speak French there!  The official language of Luxembourg is Luxembourgian, but part of me thinks it’s just French.

We didn’t have a lot of plans for Luxembourg except for one priority – visit a restaurant called Chocolate House.  Ma and I stumbled across it while researching Luxembourg and decided we absolutely wanted to go there as their cakes and hot chocolate look divine.  I asked a couple of not awful looking customs guards how to get into town, so they pointed us in the direction we needed to go and soon ferreted down Chocolate House.  One of the older houses in Luxembourg, Chocolate House is in prime location – on a shady cobblestoned street directly across from the Duke’s Grand Palace.  Pa and I ordered some Leffe and what we thought was a light dinner prior to our cake.

After dinner it was cake and hot chocolate time.  Pa had carrot cake (whyyyyy) and mom and I split a classic chocolate cake.  I also ordered a caramel bourbon vanilla chocospoon and mom ordered an 85% chocolate one.  The chocospoon is their way of doing hot chocolate – they give you steamed whole milk and you decide what flavour spoon you want.  The chocolate is in solid form on the end of the spoon, so you just stir your spoon into the milk and it turns into a divine creation. 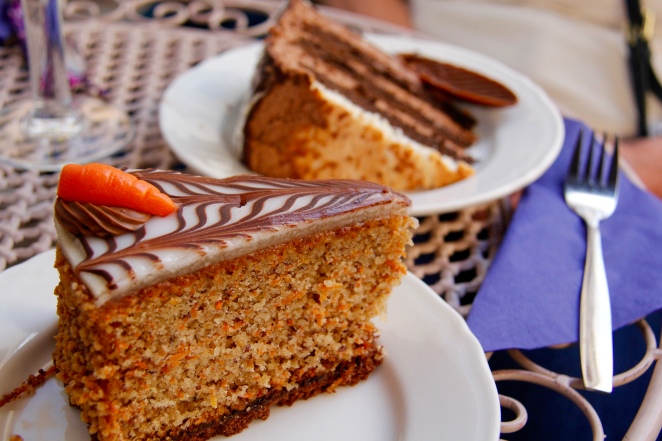 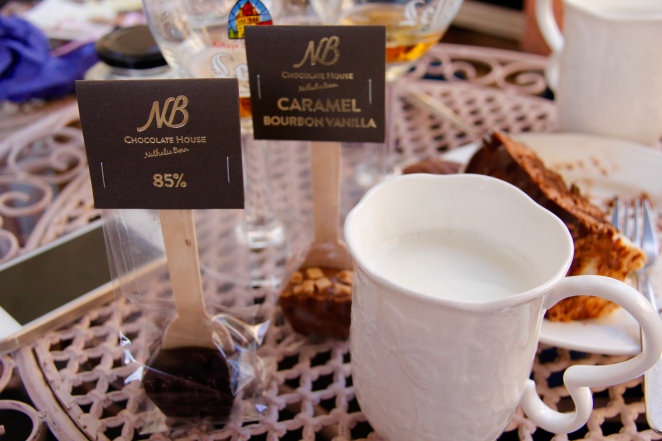 Sitting across from the Palace was a bit of a treat.  We got to watch the changing of the guard (which is exchanging one 20 year old with a rifle for another) and learned that because the flag of Luxembourg was up, the Duke was in his residence. 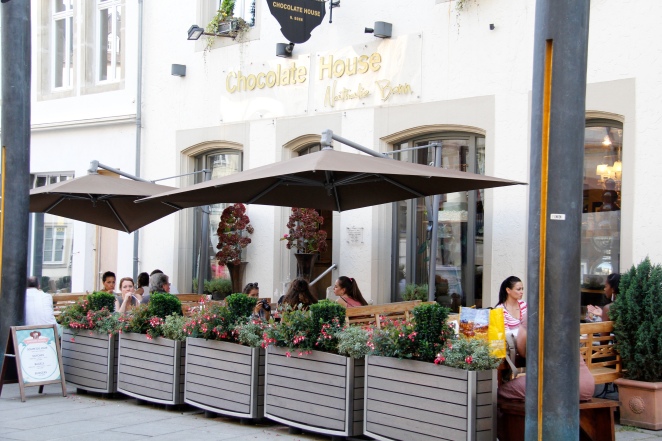 After our sweet feast, we rolled out of our booths and just ambled around the streets for a bit, noticing all of the posh women with their small dogs and impeccably dressed men.  It’s like a combination of Paris and Vienna. 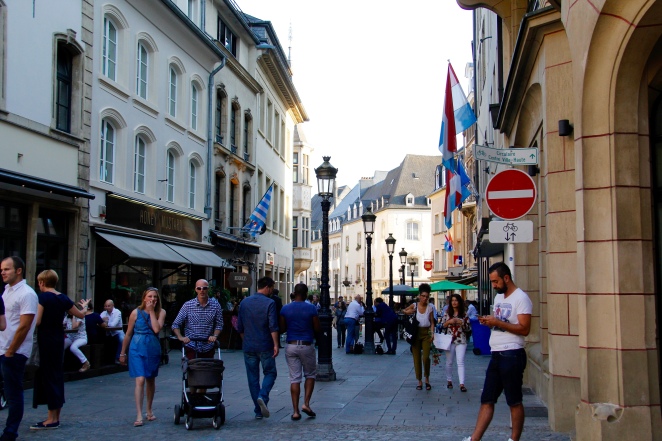 We sat in the square of Hotel de la Cite and watched a little bit of Surrey unfold before us:

3 girls, all between about 8 – 10 years old were in the square unattended, feeding pigeons and then kicking them as they got near.  The oldest girl made contact several times, feathers flying everywhere and earning a few shocked gasps from Ma and I.  I don’t care for pigeons, but I’m not going to be cruel to an animal (unless it’s a spider).  We sat wondering where these kids’ parents were and Ma contemplated if she should step in as the future serial killer didn’t seem to tire of kicking birds.  A man enjoying his ice cream then approached them, scolding, ‘Arrete.  C’est les animaux que tu ce fait mal.  Vous ecoutez?’  The man walked away but still watched from a distance.  Main bird-kicker stopped kicking birds for about 4 seconds and then went right back to it.  Minutes later 2 women, who I assume are the girls’ moms exited a restaurant and seemed to ask what happened.  The man explained that the girls were kicking birds.  What I expected to happen was the opposite of what actually happened.  I had thought that the moms would have been like, ‘oh my god, that’s awful!  Thank you for letting me know.  Child, we will talk about this when we get home’.  But no.  Both moms immediately got the backs up and started berating the man for parenting their children, saying that what their kids do is not his problem.  This went back and forth for several minutes and ended with the man saying that he was going to get the police, and the mothers of the year returning to their patio table with their hellions in tow.  Sadly, we had to leave before we could witness the stunning conclusion of this disturbance. 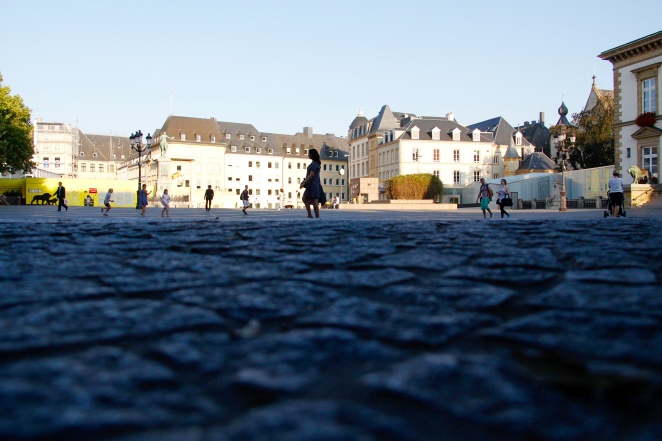 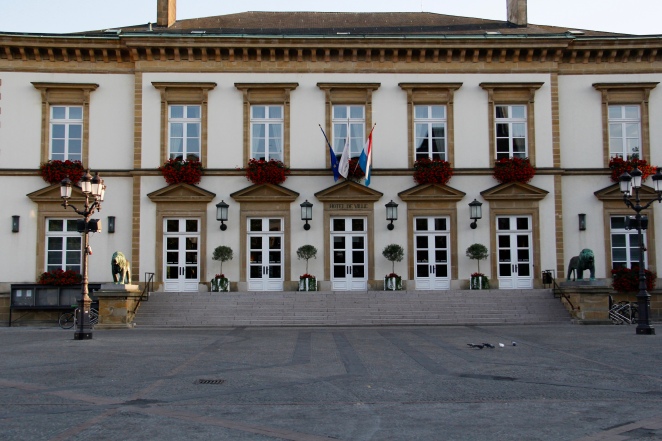 We hired a cab and headed back to the train station and made the 2 hour journey east, back to Germany and to Cochem to turn in for the night.